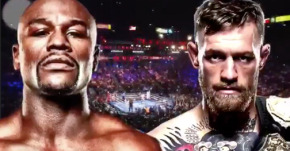 Here’s your summer reading project. Study the changing betting lines and comments for recently announced Floyd Mayweather-Conor McGregor blockbusters in the MMA and boxing worlds before making your wagers.

The enormously hyped crossover “event” between the biggest boxing and MMA superstars was formally announced last week. It will unfold Aug. 26 at the T-Mobile Arena in Las Vegas as an unusual clash between highly regarded MMA striker and perhaps the greatest defensive fighter of all time. Unlike many wagers, in which logic normally affects one’s bet, this one falls along the lines of a Super Bowl. Each side will play their favorite “team,” even though that team is one person. Mayweather-McGregor will capture substantial betting attention and pay-per-view buys.

McGregor followers reflect some of the chip MMA fans have on their shoulders about boxing. Theirs is the sport for younger professionals: the Gen Xers and millenials. After betting began with Mayweather as a 12-1 favorite, McGregor fans pounded that down to 7-1, with McGregor being a 5-1 underdog, in just three days. MGM sports book officials told me early betting volume was brisk.

Boxing insiders, meanwhile, are salivating. Please bring those odds down more, they reason, and we’ll bet the house, the farm, the city and things they don’t even own yet, on Mayweather. McGregor has a better chance to leap the Grand Canyon or buy a string of high-end casinos than pulling this off. Boxing is infiltrated, from time to time, by professional football and hockey players, who believe their skills can cross over into the Sweet Science. Their foray is usually a joke.

Boxing fans want to deliver that punchline, again, and they will jump all over this one if odds drift down to 5-2 or 3-1. They need pro-McGregor hype to accomplish that.

Beneath the spectacle is a dangerous under-current for boxing. This event has the practical effect of sabotaging the highly regarded Sept. 9 pay-per-view between Gennady (GGG) Golovkin and Canelo Alvarez. Will fans pay close to $100 twice for pay-per-view events two weeks apart? The novelty of Mayweather-McGregor will steer some money away from Golovkin-Alavarez. The only question is how much.

Looking for fight tickets? Get them here:

OK, so the Triple Crown races are done, and you may wonder where to go next. Racing answers with a string of excellent races at different tracks.

These are all high-level events, designed to bring the best horses and significant betting action. You can approach it a couple ways.

For July 1, you can view all the six-figure races as one gigantic all-star card and handicap them thoroughly a day ahead of time. Two, they can be combined with varied combination like pick threes, pick fours or pick sixes. These proposition bets are skyrocketing in popularity because of their payouts. They deliver more than one would expect because of the enormous wagering pools.