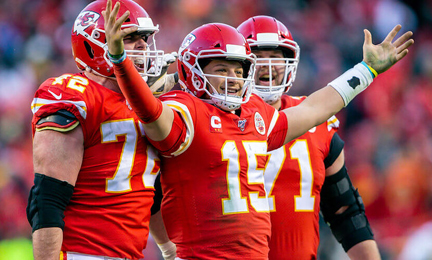 Super Bowl LIV generated more than $268 million in legal wagering in 10 states. A few states had a negative hold after the Kansas City Chiefs victory. Nevada, New Jersey and Pennsylvania led the way in handle. Handle rose 55 percent over 2019 in New Jersey.

Adding illegal wagers to the mix and the American Gaming Association estimated a record $6.8 billion was wagered on the Super Bowl.

The two states that could eventually top Nevada for U.S. sports betting handle, New Jersey and Pennsylvania, ranked second and third, respectively. New Jersey took $54.2 million in bets, up about 55 percent from last year’s total. But revenue was a negative $4.3 million, or a negative hold of 7.8 percent.

Pennsylvania pulled in $30.7 million in Super Bowl bets. Online accounted for 78.3 percent of the wagers. New England‘s sportsbooks would have done bigger business if the Patriots were in big game. Rhode Island reported $5.5 million in handle, down from $6.5 million in 2019. Revenue was almost $805,000.

New Hampshire only launched the mobile DraftKings Sportsbook at the end of December but has had a solid performance throughout the NFL playoffs. More than $2.3 million was bet on Super Bowl LIV.

Delaware, which offers no mobile sports betting, took $2.1 million in bets but ended up with negative revenue of $229,000. The majority of the handle, $1.4 million, came from straight Super Bowl bets. Another $359,000 in handle resulted from parlay cards.

West Virginia bettors wagered $3.9 million in the Super Bowl thanks to the help of two long-shuttered properties. Delaware North‘s Wheeling Island and Mardi Gras casinos both reopened their sportsbook operations on the Friday before the Super Bowl. Both shut down last year after Delaware North’s previous supplier had an issue with third-party tech suppliers. The re-launch comes with the help of It’s technology and Genius Sports‘ data services.

A majority of Iowa‘s casinos reported taking more than $6.5 million in Super Bowl bets, according to the Iowa Gaming Association.

Some of those casinos had heavy action on the Kansas City Chiefs, which led to losing large sums of money from their hold. Handle likely would have been higher if Iowa did not require in-person registration for its mobile apps.