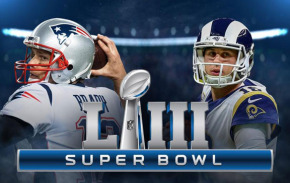 The Super Bowl has become an unofficial holiday, and prop betting has become one of its most joyous pastimes.

You know the betting world has gone wonderfully wild and bonkers when you can get action…on the ACTION.

That’s one of the crazy Super Bowl wagers reported by BetDSI, an offshore sportsbook based in Costa Rica, this week. Nevada’s sports book handle for Sunday’s game has an over/under for $165.5 million, with the over as a minus 130. The state went from $132.5 million in 2016 to more than $158 million last year. Can you imagine the drama, especially for a big bet offered by someone near the state line? (Don’t cross the state lines, NO).

This ties in with the myriad prop bets available for the Patriots and Rams. The Westgate in Las Vegas reported 422 two-way prop bets and more than 1,000 wagering options. The choices seem endless. Don’t forget to check out our friends at PlaySugarHouse.com.

Join the fun at PlaySugarHouse.com now.

Some classics along the betting circuit include the coin-flip, -102 either way, whether someone scores within the first six and a half minutes of the game, whether total quarterback sacks for both teams exceed 3.5 and if Tom Brady’s first pass of the day will be completed. Not to mention whether there will be a missed extra point, will either of the kickers miss a field goal, whether any team will score three consecutive times and which team will issue the first coaching challenge.

Not enough craziness? How about whether either team will ever lead by more than 14 points, if the longest scoring play of the game will be more than 49.5 yards and will Ryan Allen, the New England punter, actually punt a touchback?

Did you want to know about THE GAME too? Well, the Pats hovered in the 2.5 to 3-point favored range, even after the Rams opened as a one-point favorite—for all of 10 minutes. Interesting player props include those who will score first. Running backs Sony Michel and Todd Gurley are at 6-1 and 7-1. The tight ends come in at 12-1 and Brady, known for the occasional sneak down near the goal line, is 60-1.

The over/under has been in the 57 range and the Patriots, according to Westgate, were a half-point favorite in each quarter. Sounds like a no-brainer if you’re a Pats bettor, until you realize a tie is a loss on that one.

Can you handicap a prop? Absolutely. For the bet about whether there will be a score in the last three and a half minutes, there has been one in 20 of the last 25 Super Bowls.

More oddities. Length of the national anthem, 107 seconds. It has gone over 105 seconds in each of the last six Super Bowls. (Think we don’t do our homework?)

What will the first halftime song be? Maroon 5 takes center stage along with rapper Travis Scott, so who goes first is a HUGE variable. That gives you the gamut of “Moves Like Jagger” (+125) and “Girls Like You” (a 10-1 payout).

Which will be higher? The Thunder and Celtics combined points from the NBA that day or the yardage of Brandon Cooks, Robert Woods and Julian Edelman? Based on recent numbers, the NBA total would be in the neighborhood of 227 and the passing yards 236. A good even prop.

Here’s a tip from past Super Bowl parties. If you host one and make prop bets a feature, include one about which team scores last. That will keep people in the game, even if it’s a blowout.

This is just a sampling of the menu, which gets better every year. Enjoy the game. And the props.