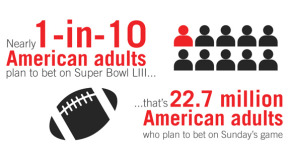 For the upcoming Super Bowl LIII on February 3, one in 10 Americans is expected to place a bet on the game, according to a new survey released by the American Gaming Association and conducted by Morning Consult.

That amounts to 22.7 million American adults who plan to bet on the game, with 52 percent planning to wager on the Rams and 48 percent on the Patriots. This year, Super Bowl bets are expected to reach about $6 billion.

With sports betting currently legal in just eight states, 1.8 million Americans still plan to bet illegally on the big game through a bookie and millions more through offshore online sportsbooks, according to AGA.

Legalized sports betting is increasing fan engagement for professional sports teams and leagues. A recent survey by LendEDU revealed that 60 percent of fans said they had never bet on sports before it was legalized. Since sports betting became legal last year, an average of $3,911 has been bet, with $124 as the median.

After sports became legalized in their home states, 37 percent of the LendEDU respondents said they profited, with 19 percent saying that they lost, 31 percent broke even and 13 percent declined to comment.