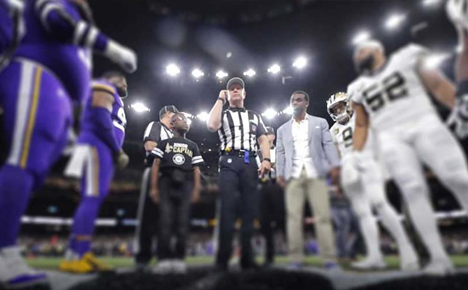 Looking for some fun bets that are unique to Super Bowl Sunday? Here are some exotics to check out before the Big Game.

Like the national anthem, the halftime show and of course, the commercials, part of the appeal of Super Bowl Sunday is the number of unusual bets you can find. Caesars Sportsbook has lots of options for the upcoming Big Game, pitting the Cincinnati Bengals against the Los Angeles Rams. Here are some highlights:

In the coin toss, tails is 6-4 in the last 10 Super Bowls, including six of the last eight games. Last year the coin came up heads, so tails may be looking for a comeback.

The Super Bowl winner is 2-8 in the last 10 coin tosses. And the loser of the toss went on the win the game the last seven consecutive times. It’s an odd streak, but worth noting as you place your bets.

Bet exactly $20 on any sporting event at Caesars Sportsbook, and you’ll get $300 in Free Bets to use toward future wagers—win or lose.

The Cincinnati offensive line has struggled mightily to protect Joe Burrow since the franchise QB arrived last season. Burrow is very effective, but on Sundays, he often finds himself on the ground. The Rams also have one of the best pass rushes in the league, led by Aaron Donald, arguably the NFL’s best player.

At any rate, this is the Super Bowl, and players usually take a minute or two to take it all in before the real action starts. Expect a sack well before a touchdown.

On Super Bowl Sunday, new players at Golden Nugget Sportsbook will receive up to $250 in Free Bets! Sign up and start betting on the Big Game.

I expect this game to feature more touchdowns and fewer field goals. These teams operate mainly from long-yardage plays. That doesn’t bode well for the odds of long field goal attempts.

As far as predictions go, the final count might go 55 yards–45 yards in favor of touchdowns.

Just in time for the Bengals-Rams game. Join Unibet Sportsbook, add funds, and your first cash bet is insured up to $500 if you don’t hit a winner.

With one exception, every game in the last two rounds of the NFL playoffs has been decided by exactly three points. These playoffs have been filled with parity and tons of tight, intense games. It would only be right for the biggest game in the playoffs to follow suit.

At +400, you can gamble that this pattern will continue.

New customers get up to a $500 refund (in free bets) if their first fixed-odds bet loses at PointsBet. What better time to get started than on Super Bowl Sunday?

In this Super Bowl, don’t expect one team to take a commanding lead and never look back. LVI should be a close contest, and if so, a first-half lead change is bound to occur.

There should be some scoring going on, and if even a single field goal is made, the odds of a lead change will greatly increase. It doesn’t hurt to try this with some plus money.

Betting on the Big Game? Make your first deposit at BetRivers and get a 100% deposit match up to $250. Because you deserve more!

This is more of a fun pick than an actual prediction. “Scorigami” means a game will end in a unique score that’s never been recorded in the NFL. It’s rare—the +1600 odds reflect that—but it does happen a couple of times a year.

If the Bengals and Rams start scoring freely and the game becomes a shootout (with possible two-point conversions attempted), it’s not as unlikely as it may seem for the Big Game to become a Scorigami.

Tackle the Bet $50, Get $50 offer when you sign up to wager on sports at BetAmerica! Just create an account, make your $50 deposit, and play!

Joe Burrow’s over/under for passing attempts in the Super Bowl is 36.5. Over in the NBA, Minnesota Timberwolves center Karl Anthony-Towns is averaging 24 points and 10 rebounds for the season, and will square off against a shorthanded Indiana Pacers team on Sunday.

Both totals will likely exceed that 36.5 figure, and in the end I expect Towns to trump Burrow. Towns should have a big-time game, pushing 45 or 50 in the points-and-rebounds departments. I just don’t see Burrow throwing it quite that many times with rushers Joe Mixon and Ja’Marr Chase on his side.

At Resorts Casino, you always deserve a winning score. So, sports bettors get a percentage of cash back on monthly sports betting losses up to $10,000.

As you can see, there’s a bet for just about any type of fan heading into Super Bowl Sunday. You can bet on parts of the game and have a rooting interest the whole way. Best of luck on what truly is one of the betting holidays of the year. Enjoy the game!

Your Guide to Super