HomeThe ShuffleSurprise! Simulation Model Says This Team Will Dominate in the MLB Season

Surprise! Simulation Model Says This Team Will Dominate in the MLB Season 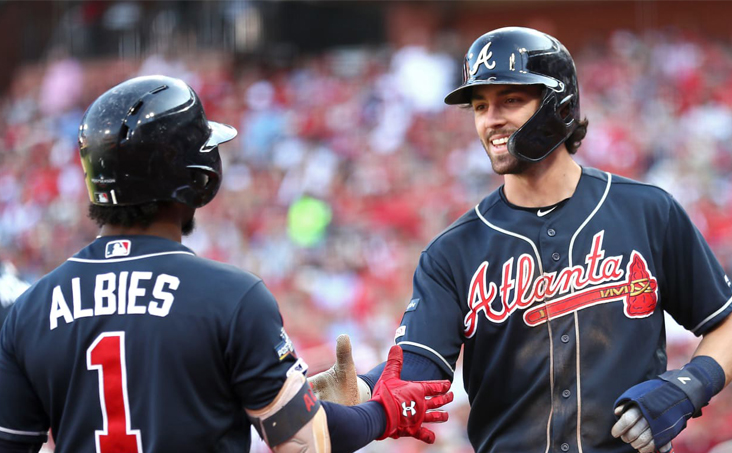 Even though Freddie Freeman’s status is unclear due to his positive Covid-19 diagnosis and the team will miss the contact-hitting skills of Nick Markakis, Ronald Acuna Jr. (l.) will headline what should be a dynamic and dangerous lineup.

With Cole Hamels (shoulder) out at the beginning of the season, Mike Soroka, Max Fried, Mike Foltynewicz and Sean Newcomb will likely make up the first four spots in the rotation, leaving the door open for one of the team’s top prospects to win the fifth spot.

Our model projects the Braves to finish with a tie for the league’s best regular-season record (39-21). Keep reading to find out why that’s the case.

Breaking Down the Offense

Despite the fact that Freeman’s status is unclear and the team will miss Markakis’ contact-hitting skills, this lineup is going to be deep and will be a nightmare against southpaws in particular. Keep an eye on prospects like outfielders Drew Waters (.309, 20 HR, 115 RBI, 130 G in AA and AAA) and Cristian Pache (.277, 12 HR, 61 RBI, 130 G in AA and AAA) to potentially make a difference as the season progresses.

Breaking Down the Pitching

First things first: after signing a one-year, $18 million deal in the offseason, Cole Hamels (7-7, 3.81 ERA, 27 G) is going to miss the start of the season due to a couple of throwing arm-related injuries he suffered.

However, one name in particular stands out as a breakout candidate and that’s Fried. The lefty’s 4.02 ERA was deceiving last year. His 3.32 xFIP (which adjusts for events that a pitcher has control over) ranked 9th among 61 qualified pitchers, above guys like Walker Buehler, Clayton Kershaw, Zack Greinke, Aaron Nola, Noah Syndergaard and Luis Castillo.

How’s that the case? The dude was incredibly unlucky. In fact, he was the second-unluckiest pitcher in baseball, as indicated by the .336 BABIP he allowed. Looking at his batted ball profile, he allowed a 2.41 ground ball:fly ball ratio (52.6% to 22.2%), which was the 2nd-most stark ratio among starters. Therefore, a lot of those grounders found holes, even if they weren’t hit particularly hard. Expect him to be a legitimate NL Cy Young candidate in the shortened season; he’s +3000 on FanDuel.

Back-end reliever Will Smith (COVID-19) will miss the start of the season, but this bullpen should be in solid shape, as Mark Melancon, Shane Greene, Luke Jackson and Darren O’Day, among a few others, make up a reliable unit.

Since we project the Braves to go 39-21 and tie for the best record in the MLB during the shortened regular season, both of these bets should be made with confidence.