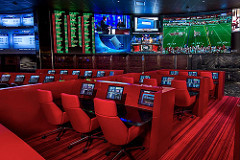 A nationwide poll commissioned by the American Gaming Association and conducted by Nielsen Sports finds that 71 percent of bettors currently wagering “with a bookie” will move “some or all” of their betting to the regulated market if they have access to “a legal platform.”

According to the Washington, D.C.-based AGA, the federal lobbying arm of the land-based casino industry, Nielsen conducted a “custom survey” of 1,032 respondents 18 and older using census date to achieve a cross-section of adults by age, gender, geography and ethnicity.

The findings were especially significant when it comes to professional football, the most popular sport among regular bettors. Currently, around 19 percent of NFL fans engage in sports betting. The survey found this would increase to 31 percent with broad access to legal books. The results were slightly lower but similar for the NBA, the NHL and Major League Baseball.

It’s also likely to boost engagement from a younger, more affluent customer, a demographic that casinos thus far have struggled to attract in significant numbers.

The survey suggests the proportion of sports fans with six-figure incomes is substantially larger among regular bettors and casual bettors than among non-bettors. Bettors also skew younger. Many more of them are in the millennial generation.

The sports leagues should enjoy substantial benefits as well.

“Expanding access to legal sports betting will bring millennial audiences back to sports broadcasts and stadiums, which is a huge benefit for sport enterprises across the country,” Slane said. “However, this potential will only be realized with proper policy frameworks that empower consumers with competitive odds, access to all bets and the ability to tap into modern platforms including mobile. Without this focus on consumers, the illegal market will continue to thrive.”

By way of example, a recent study by Copenhagen Economics commissioned by the Swedish government found a direct correlation between the level of gambling taxes and the proportion of players captured by the regulated market.

The UK Gambling Commission estimates that it captures over 95 percent of all sports betting in the legal market at a tax rate of 15 percent. In France, where the rate is much higher, roughly 40 percent of sports betting still takes place at unlicensed sites.

On this basis, it’s possible that states like New Jersey, where the online sports betting tax rate of 13 percent is even lower than the UK’s, should eventually reach much more than the 71 percent suggested by the Nielsen survey. While Pennsylvania, which has set its tax rate at 36 percent, can expect figures closer to those in France.