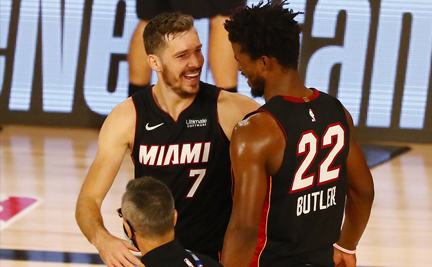 The 2020 NBA Playoffs have seen upsets and outcomes that no one saw coming, and at the halfway point, fans are at the edge of their seats. Strap in, because we’re headed for a wild landing.

With three second-round NBA series decided and one heading to Game 7, who’s still a player in this year’s conference final matchups?

If you told Boston Celtics Coach Brad Stevens two months ago that he’d have the home team in the Eastern Conference Finals, I don’t think he would’ve believed you. But here his team stands, the slight favorites to advance to the C’s first NBA Finals in a decade.

After sweeping the Philadelphia 76ers in the first round, the Celtics had to work a little harder to earn another series victory at the hands of the defending champion Toronto Raptors. With a “see-it-to-believe-it” buzzer-beater and a double over-timer accounting for two of their three playoff losses so far, you’ve got to feel good about how Boston is looking right now.

The Miami Heat’s Jimmy Butler is sick and tired of not being an NBA champion. After years of being traded around due to bad fits in various NBA locker rooms, the 31-year-old star guard seems to have finally found a team that understands him. Miami is taking to Butler’s “work-hard-or-go-home” attitude very nicely; the team’s advanced to the conference finals having only dropped one playoff game in the process. Supporting cast members like Bam Adebayo, Goran Dragic and (rookie) Tyler Herro have stepped up in a big way, which is why the Heat are arguably the hottest team in the league.

It’s no secret that Boston’s strength is in its perimeter players (Tatum, Brown and Walker). Miami is one of the best perimeter-defending teams in the league, and should be able to neutralize that as much as possible. Bam Adebayo should absolutely dominate down low against Boston’s center-by-committee program.

Ultimately, I believe this series will come down to which player steps up as the series’ best and takes over. Butler has made a career of taking over when it counts, and I don’t see why that would stop here.

Give me Miami to keep on dancing into the NBA Finals. 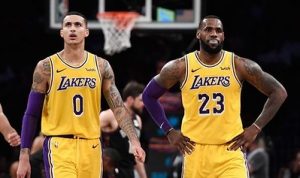 The Los Angeles Lakers stayed the course in the second round, again dropping Game 1 before rattling off four straight en route to a gentleman’s sweep.

This win in five was no less impressive than the first, coming against the well-documented Harden/Westbrook-led Houston Rockets, with two of the five best players in the league (and one the most talented to ever touch a basketball). Neither the Portland Trail Blazers nor Houston has given the Lakers a real challenge through the first two rounds. Don’t be surprised if that trend continues all the way to a parade.

This L.A. Clippers/Denver Nuggets series in progress has proven one thing. There’s a clear Tier 1 and Tier in the Western Conference. The Lakers are clearly top dogs, while little brother L.A. and Denver are just fighting for a chance to lose in five in the conference finals.

Game on! Create a new player account with BetMGM.com, and you’ll receive a 100% deposit bonus worth up to $500.

Honestly, neither team here seems interested in playing anymore. This series should have been a layup for the Clippers, who have arguably the second-best wing duo of all time behind Jordan and Pippen. Instead, they’re heading to Game 7 against a team that can’t even decide who its best player is on a nightly basis. Sheep to the slaughter.

This series will confirm who’s still King in the NBA. Lakers in 5.

These NBA playoffs have a strange journey so far. Favorites have been losing, so give your betslips some serious thought before loading up on -300 moneylines. And brace yourselves for a wild finish.