HomeThe ShuffleTake A Spin with these New Online Slots

Take A Spin with these New Online Slots 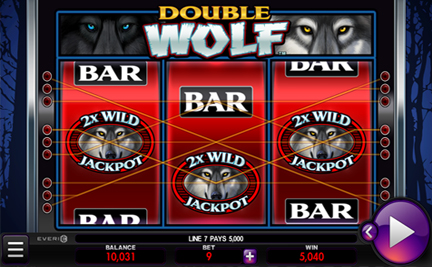 Everi continues to bring its classic three-reel slots online with Double Wolf, a three-reel, nine-line slot that follows the traditional formula of high volatility—with occasional huge wins instead of a steady stream of little hits—and the tried-and-true multiplying wild system.

The reels offer all the classic reel-spinning symbols, including single and double bar symbols and four different “7” combinations (mixed for 20 credits, single for 40, double for 60 and triple for 100 credits, all times the line bet).

Looking for a sweet deal? Just register a new player account at PlaySugarhouse.com, and your first deposit will be matched, dollar for dollar, up to $250. Get started today.

But the wild symbols are the heart of this game. The single Wild Jackpot symbol substitutes for all 7 and bar symbols in wins. The 2X wild symbol doubles the jackpot in a winning combination; two in a win multiply the jackpot by four.

This is a traditional high-denomination game, with denominations running from quarters to $50. The top program, which is likely to be in the highest denominations, returns a 98 percent payback percentage. Be sure that all nine paylines are activated, or you’ll miss out on jackpots.

Now that’s a “reel” welcome! Join CaesarsCasino.com today and you’ll get a $10 Casino Bonus—no deposit required. That means you can sign up and play, right away. 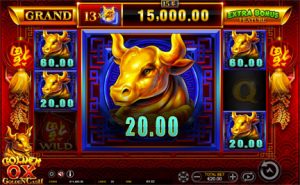 This five-reel, 25-line game features a hold-and-respin bonus, as well as a free-spin round and a random back-door mystery entry to the hold-and-respin event. There are four levels of bonus jackpots, won through the special bonus events.

During the primary game, the “Fortune Wild” symbol substitutes for all but the bonus trigger symbols on the three middle reels.

The main bonus on the game is the “Golden Cash” feature. Six or more Golden Ox symbols on the three middle reels lock in place for three free spins. Each of the symbols bears a prize amount up to $50, which is awarded after each free spin.

The Grand Prize may also be awarded instantly at random on any paid game in which no bonus features are triggered.

Grab onto this matchless deal! Log in to play at ResortsCasino.com, make your first deposit, and Resorts will match it up to $1,000! You won’t find a better deal!