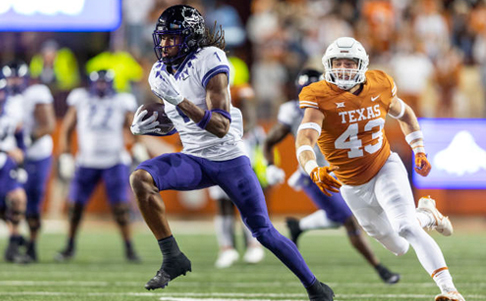 After a nearly perfect weak, NCAAF Bets is at it again offering picks on TCU, Oregon, and the total of the UCLA-USC game.

It was inevitable that NCAAF Bets would suffer an inexplicable bad beat that—even by the standards of our admittedly tough against the spread season—leaves a mark, question marks and the marquee bad beat of the season to date.

That came with the UNC Tarheels at the Wake Forest Demon Deacons Over 76.5, a.k.a. one of the easiest selections in this spot all season.

Until it wasn’t. These two video-game offenses decided to put the joysticks down with 19 minutes remaining and actually play a semblance of defense. The pair combined for 67 points over the first 41 minutes and were heading to another 55-53 outcome when someone pulled the plug on the video game console and told the two to go outside in the fresh air and play defense.

Somewhere, the ghost of TCU Horned Frogs alum and iconic sportswriter Dan Jenkins must be downing another J&B on the rocks and whipping up another one-liner heavy column about how his alma mater is getting disrespected for no conceivable reason. On this earthly plane, TCU continues to be the red-headed stepchild of oddsmakers of every genus and species.

Last week, the Horned Frogs and their 9-0 record were 7-point underdogs to a 6-3 Texas team. Never mind the fact the spread made TCU the largest underdog for an AP Top 5 team against a Non-Top 10 team since the FBS/FCS split—in 1978. Never mind the fact TCU had covered each of the previous three weeks in games decided by 10 points or less.

Don’t forget that Texas was 4-1 ATS at home. TCU did what TCU has done: ignore the numbers and pay attention to the process, grinding out a 17-10 road win that made it 10-0 and gave the Horned Frogs their fourth consecutive cover by 10 points or fewer.

TCU is a healthy favorite against a Baylor Bears team coming out of a 31-3 poleaxing by Kansas State. Right? Right?

Well … no. The Horned Frogs are the No. 4 team in the country. They’ve trailed in the second half in four of their seven Big 12 victories—key word here being “victories.” They’ve beaten Baylor in six of their last seven meetings. They are 8-2 ATS against Baylor in their last 10 meetings, 4-0-1 ATS in their last five road games and 4-0 ATS in their last four conference games. And yet, TCU finds itself only 3-point favorites.

Sigh. We’re pulling hamstrings repeatedly jumping on the TCU bandwagon. But here goes another one. 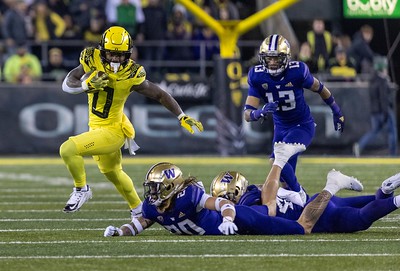 That crashing sound you heard coming out of the Pacific Northwest was the aura of Fortress Autzen tumbling to the Eugene floor. That, courtesy of the Washington Huskies’ improbable 37-34 victory that dropped the Oregon Ducks from their nest as the Pac-12’s first-among-equals team.

Improbable, not only because Washington were 12-point underdogs, but the Ducks came into the game perfect at home, perfect ATS and with a perfect path to the Pac-12 Conference championship game.

Now, the Utah Utes—the same Utah Utes that took apart Oregon twice in a three-week span last year to win the Pac-12 title—come into Autzen one week after the Huskies reduced the most formidable home-field advantage in the conference into rubble. The Utes do so having scored 40 or more points in six of their last seven games and averaging 39.5 points and 462 yards a game.

And yet, even putting aside Oregon’s dominance at Autzen, where the Ducks are 6-1 ATS in their last seven, the Utes are deserving dogs here. They’re 1-3 ATS and 2-2 SU on the road this year.

And we haven’t mentioned as good as Utah’s offense is, Oregon’s is better. With Bo Nix at the controls, Oregon is second in the nation in yards-per-game (527) and fourth in the nation in points per game (42.2). Not to mention, the Ducks are first in remembering what happened to them last year.

We’re betting the Ducks forget last week as they rebuild Fortress Autzen in plenty of time to put the Ducks back in the conference hunt.

Take Another Freeway in Battle of L.A.

While the USC Trojans were munching on the proverbial popcorn last Saturday, two of their nemeses: the aforementioned Oregon Ducks and their blood rivals, the UCLA Bruins, were self-immolating, their already problematic paths to the College Football Playoff going up in flames.

And yet, even as USC remains the only one-loss Pac-12 team, the Trojans couldn’t fully enjoy their popcorn. Not after they lost standout running back Travis Dye to a second-quarter injury in their 55-17 Friday night dismantling of the Colorado Buffaloes.

So backup RB Austin Jones is the next one up. Meanwhile, the Trojans should get receivers Jordan Addison and Mario Williams back to fortify an offense that averages 499 yards and 42.4 points a game. As prolific as that is, UCLA counters with an offense averaging 504 yards and nearly 40 points a game, with 240 of those yards coming on the ground.

Now, the flip side to those offensive fireworks gives you an idea where we’re going here. USC surrenders nearly 400 yards a game; UCLA nearly 380, although neither gives up more than 26 points a game.

The favorite in this game is 6-2 ATS in the last eight meetings. But rivalry games—especially this one—are tricky to pick. We’re counting on the defenses taking the night off and the trends working overtime. The Over is 4-0 in the last four meetings between these two, 4-0 in USC’s last four conference games, 6-2 in UCLA’s last eight games and 9-3 in UCLA’s last 12 conference games.

As tempting as taking visiting USC and giving 1.5 points is—and we wouldn’t fault you for throwing that in a parlay—we’re sticking with those trends in a rivalry game and letting the offenses make the popcorn for us.