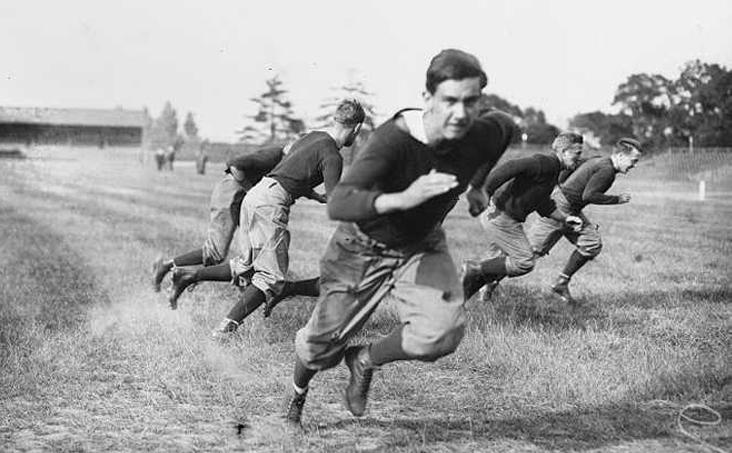 How well do you know your gridiron basics? Test your knowledge with this brief history of the American game, from then to now.

Fans of U.S. football tend to look down at English football. In fact, we Yanks have a whole ‘nother word for it: soccer.

But our own game is not exactly homegrown. Pro football, American-style, not only evolved from a form of soccer, but also includes elements of rugby, and started with rules adapted from the London Football Association.

As we prepare for the sport’s ultimate contest, let’s hop into the Wayback Machine and revisit the Ghosts of Gridirons Past.

The First Game (But Not the First Tackle)
Most sports historians insist the first real U.S. football game took place in 1869 between two New Jersey college teams, Rutgers and the College of New Jersey (now Princeton).

In many ways, though, that early game was still more like soccer. For one thing, they used a soccer ball! For another, this was a pure kickers’ game; carrying and throwing the ball wasn’t allowed.

But it was similar to latter-day football in one respect: after Rutgers won, its players ran the other guys out of town. Even then, football fans were passionate.

It wasn’t until 1875, in a match between Tufts and Harvard, that players advanced the pigskin by physically picking it up and running with it. That game also saw the introduction of the tackle.

Bet the coin toss at Pointsbet.com! If you lose, get an in-play bonus of up to $25.

Rules of the Game

Many people credit the invention of baseball to Abner Doubleday, a Civil War veteran from Cooperstown, New York. That provenance has since been debunked, but we know the equivalent in football: Walter Camp, a Yalie and member of the second American Intercollegiate Football Association (AIFA). In the late 1800s, under Camp’s direction, the AIFA established common rules including the system of “downs” in football, and reduced the number of players per team from a swarm of 25 to 11.

Evolution of Uniforms
Football is an intense, sometimes brutal contact sport. Yet in the early years, players hit the field dressed only in lightweight, lightly padded togs, color-coordinated so they could tell each other apart.

At the time, numbered jerseys were unheard of, and because most teams tended to dress in dark colors—usually navy or black—you can imagine how hard it was for spectators to keep the teams straight.

Helmets weren’t standard, though some teams sported stylish, turban-like headgear. In 1896, a baseball player named George Barclay designed a “head harness” to protect players of both sports. But such equipment wouldn’t be mandatory for decades—college players weren’t required to wear helmets until 1939, and professionals didn’t have to do so until 1943.

WilliamHill.com offers a prop bet on overtime in Sunday’s game: Yes +650, No -1000. Get this and other props at William Hill Sportsbook.

Informal, traveling athletic clubs were the norm in the late 19th century, but by World War I, with a shortage of players, clubs and teams began recruiting from other states. This led to the establishment of the American Professional Football Association (later the National Football League) in 1920. Based in Canton, Ohio, the organization had 14 teams, with names like the Akron Professionals, the Rock Island Independents, the Muncie Flyers, the Decatur Staleys, the Columbus Panhandlers and the Canton Bulldogs (with star player Jim Thorpe, abv.).

The Arizona Cardinals are the oldest original franchise, while Wisconsin’s Green Bay Packers, which took their name from a sponsor, the Indian Packing Company, joined the league in 1921.

During World War II, due to another manpower shortage, the Pittsburgh Steelers and Philadelphia Eagles were unable to singly support full team rosters. Believe it or not, for one season, they temporarily joined forces as the “Phil-Pitt Steagles!”

Bet the big game on February 2, and get a $25 Sportsbook Freebet at GoldenNugget.com.

The Super Bowl Is Born
In 1958, a televised contest between the Baltimore Colts and New York Giants, still revered as the “Greatest Game Ever Played,” drew 45 million viewers. The NFL had become big business, and the league was approached by several franchises to expand. When the owners refused, a rival group formed: the American Football League, or AFL.

Finally, in June 1966, those rivals merged, and the best teams of both leagues squared off in the first of what would become a series of annual championship games, initially known as the AFL-NFL World Championship. As we all know, that clash of titans would eventually be known as the Super Bowl.

And who won that first bowl game, back in January 1967? The Green Bay Packers, led by head coach Vince Lombardi, pounded the Kansas City Chiefs 35-10, and QB Bart Starr became the first MVP. Lombardi, for whom the Super Bowl trophy is named, also took the Packers to a second win the following year.