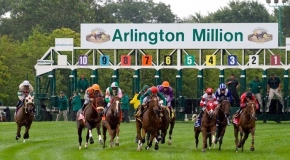 If you have a major event, own the day. Arlington assembled a fantastic turf-racing card to augment its premier attraction. The Beverly D, at $600,000, is contested a 1 3-16 miles. That puts Arlington’s two biggest races of the year on one card. Throw in the $400,000 Secretariat and the $250,000 St. Leger and one observes $2.25 million of major purses at one card, in one day.

That should attract legions. All four races are on the turf, a surface that appeals to race handicappers. Turf races often draw fields large enough to ensure that good horses will be overlooked by bettors. They represent great wagering opportunities.

Tracks have picked up on this, and the piggyback effect, to court “high racing rollers.” Saratoga, for instance, offers stunningly packed Saturday cards in its meet running from late July through early September. Del Mar, on August 19, adds two races eclipsing $500,000 to accompany its $1 million TVG Classic.

Why entice serious players for only one race? Why not engage them, aim for record-breaking handle and simulcast revenue?

Wagering at these tracks is, of course, prominent throughout the week. Yet when a facility lines up major Saturday races, the weeklong hype funnels into a major day and may sustain the property for a long time.

This philosophy also applies to simulcast players. If a gambler is going to handicap, and play three or four races on your card, he might tout the entire program and pour substantial money into the other races. Tying strong supporting events to major blockbusters will benefit the tracks, and the industry. Well-cultivated bettors tend to stay active throughout the year.

And, Down the Stretch They Come!

No, this isn’t Dave Johnson’s famous race call. It’s the baseball season, thundering into the homestretch with divisions and wild cards on the line.

The Yankees and Red Sox, close in the American League East standings, have no less than 10 matchups in August and September, beginning Friday in New York. The Red Sox had an unbeaten week to start August and could be due for a letdown because their weekend sweep was over the lowly White Sox. But, if that hunch gets factored into the line, thanks but no thanks.

Fantasy fans are sorry to see that White Sox closer David Robertson, Mets bullpen ace Addison Reed and Twins closer Brandon Kintzler became irrelevant via trading-deadline deals. They strengthened the Yankees, Red Sox and Nationals, respectively, but what did they do for you? The Yankees may now have the best bullpen in baseball, if they can nurse a lead into the seventh inning.

And are you ready for some football? Kansas City at New England Sept. 7 will be here before you know it.