The Final Stretch to the Kentucky Derby 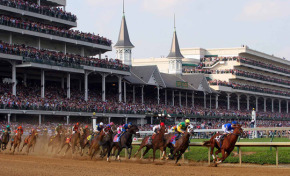 In some circles, this is THE DERBY, Part One, not just the Florida Derby, Saturday, March 30 at Gulfstream Park.

As usual, over the next two weeks, tracks with major stakes races want to corner the market with supporting events. On March 30, Gulfstream features the $300,000 Gulfstream Park Mile and $250,000 Gulfstream Park Oaks, along with the $250,000 Pan American, the $125,000 Cutler Bay and Sanibel Island events, and the $100,000 Sand Springs. That’s eight major races on one card, and it will attract substantial betting interest.

In the sixth, Liza Star teamed with 7-2 shot Gracias Adios to produce a whopping $343 exacta, with the payoff enabled by the 6-5 favorite running out of the money. In the 12th, Sanchez got Joe Cain to the wire for second place and produced a $156 exacta. Favorites ran first and third and the trifecta, with the 40-1 shot second, returned $424 for $1. Sweet.

Wonder how you could have caught that? Either by wheeling Liza Star first or second with the field, hoping the favorite would run out…OR taking a three-horse box with a long shot and two favorites. In low-level claiming and maiden races, the improbable often happens. The claiming price in the Liza Star race was $6,250.

From two weeks back, remember the discussion about the 12 seed upsetting the No. 5 in the first round of the NCAA March Madness bracket 35 percent of the time? Well, this year, three of the four dogs won outright, as Murray State, Oregon and Liberty prevailed from that spot and the University of New Mexico lost by one point but covered. That four-pack, had you taken all No. 12s, would have made a handsome return.

For all your sports betting action, check out PlaySugarHouse.com or ResortsCasino.com.

Major League Baseball begins this week, with the Phillies having made the most moves and seeing their season over-under expectation hover from 83 to nearly 90.

High-profile players moving to new teams are so pumped, they often slug a home run in their first game with the new team. That means Bryce Harper, Nelson Cruz and Manny Machado are candidates to go deep in their first outing.