The fifth edition of The Match is Friday in Las Vegas. The 12-hole contest pits Brooks Koepka (r.) against Bryson DeChambeau. The golf champs have been teed off at each other for the past year.

The fifth edition of The Match will be held the day after Thanksgiving. Call it a grudge match as golfers Brooks Koepka and Bryson DeChambeau meet after sniping at each other for the past year.

It all started innocently enough: Koepka complained about noisy spikes on DeChambeau’s shoes when he walked behind him during a TV interview. From there, “The Feud” ramped up quickly. In subsequent tournaments, Koepka fans chanted “Brooksie!” at DeChambeau, and he had them tossed out.

The golfers kept after each other down the stretch run of the 2021 season, but apparently buried the hatchet when they both played on the history-making Ryder Cup team that destroyed Europe, 19-9.

But the chatter continued, and in September, it was announced that Koepka and DeChambeau would face off in The Match. It’s the fifth edition of the made-for-TV contests pitting memorable golfers (and sometimes non-golf athletes) against each other in different formats.

Get in on the Koepka/DeChambeau action. Earn up to 40% more on your parlays at Borgata Sportsbook! Opt in and place a 4-7 leg parlay on any combination of sports or event. If your parlay wins, the additional bonus is yours.

This year, The Match will be held at the Wynn Las Vegas Golf Club, one of the most exclusive courses in Vegas, with rounds starting at $600. The first Match, in 2018, was also in Las Vegas; the contest between Tiger Woods and Phil Mickelson was at Shadow Creek, a Wynn-developed course, now owned by MGM Resorts. Both courses were designed by the renowned Tom Fazio. The most recent Match was just last July. It teamed DeChambeau with Green Bay Packers quarterback Aaron Rodgers against Mickelson and Tampa Bay Bucs QB Tom Brady.

This year, a format change for The Match limits it to 12 holes, most likely a nod to heavyweight boxing matches that are decided in 12 rounds or less. How will this impact each player? It’s uncertain, but it will surely be interesting.

While The Feud is fun and entertaining, DeChambeau has put to rest some of the assumed bitterness between the two.

“This social media stuff has definitely been driven by a lot of external factors, not necessarily us two,” he said. “We had some great conversations during Tour Championship week when we had dinner, and then this week as well. I sat down and had dinner with him last night, and it was fine. I think there may be something fun coming up here moving forward, but won’t speak too much more on that.”

Register a new player account at Caesars Sportsbook and your first real money wager will be matched with a Free Bet up to $1,001—win or lose! Minimum odds -200. 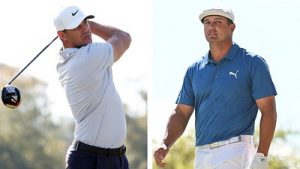 It all comes down to who is the better golfer at this point in his career.

DeChambeau hasn’t played since the Tour Championship, and only has two Top 10 finishes since finishing in the Top 3 at the Players Championship in March.

Koepka, meanwhile, has struggled in his recent appearances. His last two appearances, ironically, have been in Vegas, and both were pretty big flops for a golfer of his stature. At the Shriners Children’s Open, he finished in a tie for 67th, and a week later, with a smaller field, wound up tied for 38th. DeChambeau won the 2020 U.S. Open, while Koepka finished second in the Tour Championship this year.

A week ago, it was an even-money match with both golfers sitting at -112. But DeChambeau has moved ahead at -125 at William Hill and Caesars Sportsbook, and most other major sports betting sites. Koepka clocks in at +105.

But how about the props, which you can find at PointsBet? A hole-in-one will get you 70-1 odds for both players, and 40-1 odds for either player. There are props for which golfer will perform better on the par-3s, 4s and 5s, but it was unclear at press time how the course will be laid out.

Boost your personalized parlays—your way, every day at PointsBet. Receive 1 Boost on Traditional Parlays and 1 Boost on Single Game Parlays every day!