The Old Man and the Sea, PGA Style 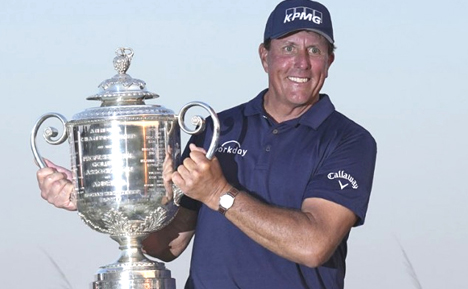 Phil Mickelson cheated nature and age last week to win the PGA Championship. He became the oldest winner of a major. He made lots of bettors happy. Can he do it again at the U.S. Open?

You’re forgiven if you gave up on superstar golfer Phil Mickelson.

After all, it’s been eight years since Lefty won his last major championship (at the Open Championship in the U.K.), and he’s won just two more tournaments since. In his last 19 starts, Mickelson didn’t have a Top 20 finish—a shocker for someone who plays with such consistency. But Mickelson kept insisting that he was close.

Bettors didn’t believe it. When he arrived at the PGA Championship last week, at the spectacular Ocean Course on Kiawah Island, South Carolina, the odds were against him—big time. At William Hill, Mickelson was bucking 200-1 odds to win the event. And you could find him at 300-1 at other books.

When he started climbing the leaderboard last Thursday, the odds slipped, and by the end of the day, Mickelson was at 12-1. The next day, he started to fade a bit, and his in-play odds soared again, this time to 400-1 at BetMGM. One player turned a $2 bet into $800!

On Sunday, there were still some doubters, even though Mickelson held a two-shot lead entering the day. How could the old man hold off a string of young challengers like second-place Brooks Koepka, who specializes in winning majors, and was favored after 54 holes? Leaders are rarely less than even money, but Mickelson was 3-1 as he teed off Sunday afternoon. And when he lost the lead to Koepka on the first hole, his odds doubled to 6-1.

Register a new-player account at WilliamHill.com. If you lose your first bet, earn a Free Bet in equal value up to $500!

Playing Against the Odds

The Ocean Course was relentless. Sea breezes impacted every shot, from monstrous drives to short putts. The greens were either bone-dry or full of moisture, leaving golfers confused about how hard to hit those putts. And sand was everywhere. Mickelson sunk his bunker shot on the eighth hole for a birdie, while Koepka bogied.

Other odds were against him, as well. No one over 50 years of age had ever won a major. Now nearly 51, Mickelson’s drive to the finish was legendary, but a real rollercoaster. Five times during Sunday’s round, there was at least a two-shot swing, with Koepka and Mickelson trading punches with birdies and bogies or worse.

But two holes into the back nine, Mickelson grabbed a five-stroke lead, only to fritter it away when he bogied the 12 hole by dropping his approach shot into the water.

Koepka was replaced as his closest challenger by Louis Oosthuizen, the last golfer to buck 200-1 odds to win a major, the Open Championship in 2010. But when Oosthuizen’s birdie putt on 18 came up short, Mickelson could double bogey and still win. 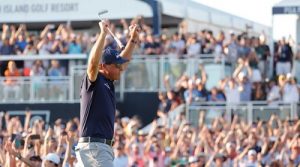 “We lost low six figures overall” at Nevada sportsbooks, William Hill assistant director of trading Adam Pullen told ESPN. “We lost over a million dollars when Tiger won the Masters a few years ago. I think this is probably the second-biggest loss after Tiger that we’ve had.”

So where does this leave Mickelson as he looks forward to the next major, the U.S. Open coming June 14-17? Is it an advantage that he’ll be playing on his hometown course, Torrey Pines in California? And how about the fact he’s going for the “grand slam” of golf, and the trophy from the only major he’s never won?

His victory has done little to encourage betters as we approach the U.S. Open. Mickelson starts at 50-1 at William Hill and BetMGM. Jon Rahm leads the betting at 12-1, along with two golfers who missed the cut at the PGA, Dustin Johnson and Justin Thomas. Bryson DeChambeau is next at 14-1, with Spieth at 16-1.

Can Phil do it again? No one thought he could win another major. Do you still doubt him? The old guy might make a great payoff, even at 50-1.

Reward yourself with Parlay Plus, a 40% parlay boost at BetMGM.com. Just opt in and place a 4-7 leg parlay on any combination of sporting events.

Before you bet the U.S. Open, better know how golf wagers work. Check this guide to golf-betting basics at iGamingPlayer.com.