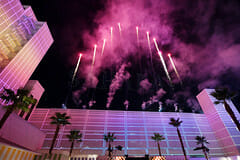 The SLS Las Vegas is going back to the name of the famed Strip resort it replaced four years ago. Its return as the “Sahara Las Vegas” is slated to take full effect later this year, accompanied by $150 million in improvements launched by the resort’s new owners.

The SLS Las Vegas will be the Sahara once more.

The change is expected to take effect later this year, although last week the resort’s Strip marquee was already proclaiming the location as the Sahara Las Vegas.

“The Sahara played an important role in the evolution of the destination,” Meruelo said. “And we are now responsible for shaping a new narrative. We are writing the next chapter in the city’s evolution, for the love of Vegas.”

The announcement had been anticipated since Meruelo’s privately held Meruelo Group bought the struggling property last year for an undisclosed sum. It acquired some urgency last month after California-based SBE Hotel Licensing, which owns the SLS brand, sued the new ownership, claiming it owes it at least $450,000 in back fees for the right to use the name.

SBE was part of a partnership that purchased the Sahara in 2007 and closed it in 2011 for a $450 million transformation as the SLS. The new resort opened in 2015 but failed to catch on with its target upscale tourist market. It’s been a money-loser since its debut. SBE exited its investment in 2017.

The Meruelo Group, primarily a media conglomerate that also owns the Grand Sierra Resort in Reno, has pledged it will invest a reported $150 million to remodel the gaming floor, the spa, the hotel lobby and certain areas of the property’s three hotel towers, including some rooms, and to add other attractions.

The Sahara opened in 1952 as one of the Strip’s original resort-scale gaming palaces. It was famed for decades as a celebrity hangout known for big-name entertainment including the fabled Rat Pack, headlined by Frank Sinatra, Dean Martin and Sammy Davis Jr.