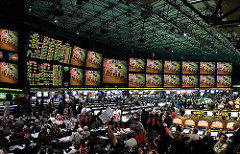 The effort led by the American Gaming Association to repeal the 25-year-old federal ban on sports betting got new life last week with the announcement of a new coalition of government, law enforcement and business leaders with a mission to bring about the repeal of the Professional and Amateur Sports Protection Act (PASPA) of 1992.

The ASBC will lead an all-inclusive advocacy campaign “focused on ending the failed sports betting law known as PASPA,” according to the announcement from AGA. “It brings together law enforcement officials, states’ rights advocates, policymakers and industry leaders—all of whom believe that it’s time to legalize and regulate sports betting in America. This diverse group of stakeholders is critical to pushing for legislative action in Washington, which is the first piece of the puzzle. Ending PASPA means states can then decide if they want to have sports betting or not.”

“The ASBC will empower law enforcement with robust regulations and 21st century tools,” the AGA said in its announcement. “The coalition will include an advisory council of law enforcement and state and local elected officials to solicit critical input as all invested stakeholders craft a solution.”

At the launch announcement, AGA President and CEO Geoff Freeman emphasized that support from business, law enforcement and the public of repealing the sports betting ban means the effort is reaching a tipping point.

“The American Gaming Association believes a perfect storm is aligning and now is the time to repeal a failing law,” Freeman said during the announcement—citing bipartisan support nationwide for legal sports betting. He also cited an Oxford Economics report concluding that legal sports betting in the U.S. could support more than 150,000 jobs.

“We are partnering with local and state elected officials, law enforcement and other diverse interests to tell Washington to get out of the way,” Freeman said. “Regulated sports betting is what fans want and sports integrity demands.”

PASPA banned sports betting in all but four grandfathered states—of which only Nevada is authorized to conduct full sports-betting operations. AGA has led the campaign to repeal the law, citing the massive, $150 billion illegal sports-betting market that accounts for more than 97 percent of all sports wagers in the U.S.

Freeman also said the AGA has hosted seminars for lawmakers showing the newest sports-betting technology being employed in Europe, demonstrating the tracking capabilities in place to ensure integrity of the games and system.

“Nearly six in 10 Americans are in favor of ending the federal sports betting ban and allowing states to decide the question of legalization,” the group’s website says. “Fully 72 percent of avid sports fans are in favor of ending the ban; and nearly two in three Americans believe regulated sports betting would allow communities to benefit from additional tax revenue and job creation.

“But shifting public attitudes is only the first step towards ending the sports betting ban. To change the sports betting law, an entirely new policy environment must be created. The American Sports Betting Coalition brings together leaders in law enforcement, business, and organizations representing elected officials to advocate for a repeal of PASPA and give states the ability to decide the question of legalization.”

The group’s plan includes “education of policymakers, law enforcement and all relevant stakeholders on the wide-ranging negative impact created by a thriving, illegal sports betting market and the need for change,” according to the mission statement, which also pledges to “advocate for repealing the failed federal sports betting ban and granting states the ability to determine how to address sports betting; empowerlaw enforcement with robust regulations and 21st century tools to monitor and track sports wagering activity; and, “deliver for fans what they demand—a safe, legal, transparent environment for deeper engagement with the teams and sports they love.”

Meanwhile, New Jersey Governor Chris Christie, on the Boomer and Carton radio show on WFAN sports radio, expressed optimism that New Jersey’s case before the Supreme Court challenging PASPA will go in the state’s favor. If it does, he said sports betting could be in place at casinos and racetracks by early 2018—“certainly in time for the Super Bowl (in February),” Christie said.

The U.S. Supreme Court has yet to decide whether it will hear New Jersey’s appeal of lower-court rulings striking down its state law legalizing sports betting. Christie said if the high court rules in the state’s favor, Monmouth Park would be ready to accept bets “inside a week to 10 days.”

Since Christie signed the New Jersey law in 2014, most of the major sports leagues that challenged it have softened on the issue or repealing the ban on sports betting. Only the National Football League has remained steadfast in its opposition.

Last week, Sports Illustrated reported in Peter King’s “Monday Morning Quarterback” column that player’s union executives from all the major leagues have had several meetings to prepare for the potential legalization f sports betting, and the impact it could have on players.

“Yes, the sports unions have been discussing the issue, in particular around the integrity of our respective games,” NFL Players Association President George Atallah told MMQB. “We’re collaborating on it. We might be open to changes that are coming because of (legalized sports gambling), but before we get to the revenue aspect of it, do we have the infrastructure in place to prevent any sort of shenanigans? That’s the issue.”

Atallah said the union is currently studying how sports betting is conducted in Europe.