The WSOP Main Event 2018 got a boost from online players 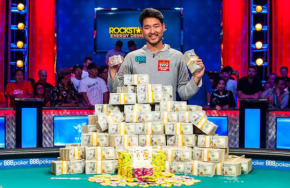 If you’re a poker fan, you probably already knew that.

However, there’s also another story that comes out of this year’s WSOP that should be pretty interesting to online players.

This year’s main event had the biggest attendance since 2006, and it’s the third increase in the main event attendance in the last three years. Overall attendance for WSOP events is expected to be one of the largest ever.

Several factors are being pointed to as the reason for the growth—a stronger economy for example—but the WSOP is also clearly getting a huge bump from online play. WSOP.com not only offered satellites for regular events and the main event, it held four online bracelet tournaments.

And this year, players in New Jersey were able to play in those events without traveling to Nevada. Most online players were still physically in Nevada, but the addition of players thousands of miles away in New Jersey had a clear effect.

In winning the tournament, Mendez became the first player to win an online WSOP bracelet playing from outside the state of Nevada and obviously was the first New Jersey player—playing in New Jersey—to win a WSOP online bracelet.

The $1,000 Online NLH Championship was the largest of the four tournaments and went to Chicago pro Ryan Tosoc. The addition of New Jersey players this year led to 1,635 entries—a boost of 25 percent over last year’s tournament. Tosic won $238,779 of a better than $1.5 million total prize pool.

We’d say the WSOP’s online future looks pretty bright. Get in on the WSOP.com action. Sign up here.