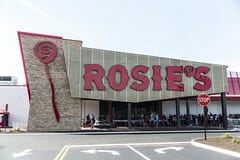 Rosie’s Gaming Emporium recently opened in South Richmond, Virginia. It’s the third Rosie’s in the state; the others are located at the Colonial Downs racetrack in New Kent County and in Vinton, Roanoke County. Owned by Colonial Downs Group, all three offer historical horseracing machines—currently the only form of casino-style gaming allowed in Virginia. With 700 machines, the newest Rosie’s is the largest.

General Manager Phillip Harris said, “One of the things that we are going to promote through the community is job creation, being part of the community. So, for Rosie’s and Colonial Downs, we wanted to come into the community, bring them along and share in the growth in this area.”

Harris said the company invested $41 million to transform a former big-box store into Rosie’s, which includes a 100-seat restaurant, bar, gift shop and off-track betting area. The project created 225 jobs and is expected to generate $11 million in annual revenue for Virginia and about $4 million for the city of Richmond, according to Colonial Downs figures.

At the grand opening, the Colonial Downs Group presented $10,000 checks to Feed More, Goodwill of Central and Coastal Virginia and TAPS, a program that serves families of fallen soldiers. The company also pledged a $500,000 total gift to a South Richmond elementary school. The company also put up a security tower overlooking the parking to address some residents’ concerns regarding crime around the casino.

In May, players put nearly $71 million into the historical horseracing machines at Rosie’s in New Kent and Vinton, generating $4.7 million in revenue for Colonial Downs, according to a Virginia Racing Commission report.

The company plans to open a fourth Rosie’s in Hampton this fall, and also is pursuing voter referendums in Danville and Dumfries in Prince William County; county-wide voter approval is required before the gambling parlors can open. Statewide, the racing commission has approved up to 3,000 historical horseracing machines to operate.