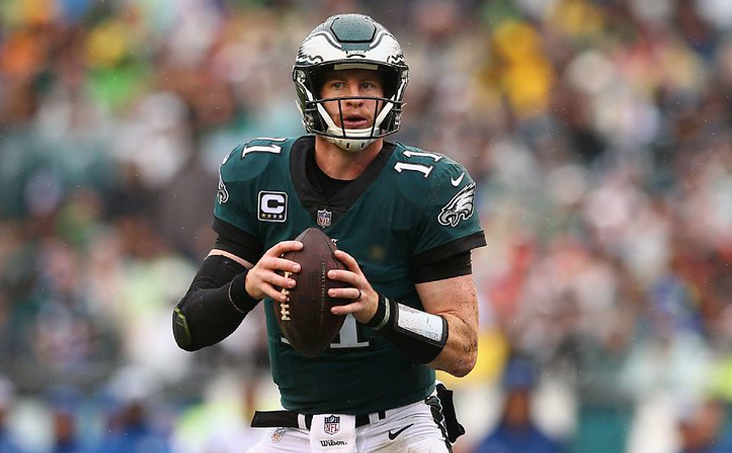 For some reason, major sportsbooks say Philadelphia Eagles’ QB Carson Wentz will come in short of his 2019 passing yard total. In this case, barring injury, betting the over is essentially free money.

Carson Wentz put the Philadelphia Eagles on his back over the course of the 2019 campaign, guiding them to an improbable playoff appearance while throwing for 4,039 yards with 27 touchdowns and just seven interceptions.

Due to an insane amount of injuries, Greg Ward Jr. was his primary wideout in multiple games down the stretch.

Inexplicably, major sportsbooks are projecting Wentz to come in short of his 2019 passing-yard total. In fact, MGM and FanDuel have his total at 3899.5 while DraftKings lists it at 3900.5.

Quite simply, barring injury, betting the over is essentially free money.

Just take a look at the guy’s weapons.

Wentz’s group of receivers is dynamic, consisting of Alshon Jeffrey, DeSean Jackson, newcomer Marquise Goodwin and rookie Jalen Reagor, among others like J.J. Arega-Whiteside and Ward.

Rookies John Hightower and Quez Watkins could also earn a spot on the 53-man roster. Further, tight ends Zach Ertz and Dallas Goedert are the most dangerous pass-catching tandem at the position in the entire NFL.

Injuries will always be an ugly and unfortunate aspect of the NFL. The Eagles were hit hard by them last season and could be again in 2020. But, it’s important to not simply glance over the fact that this passing offense has all the makings of a dynamic one.

(You can track how public and sharp bettors view the Eagles throughout the season on BetQL’s dashboards!)

Not many rosters can boast proven talent with that level of production.

Sign up to wager at BetMGM.com and reward yourself with up to 40% more in profits on your winning parlays! With the Multi-Sport Parlay Boost, just place a 4-7 leg parlay on any combination of sports or event.

At this moment, Philadelphia’s offensive line consists of starters Andre Dillard, Isaac Seumalo, Jason Kelce, Brandon Brooks and Lane Johnson. When fully healthy, the Eagles didn’t have a single weak link on their o-line in 2019 and ranked first on Pro Football Focus’ end-of-season ratings. Since all five starters are returning and the team added some rookie depth, give Wentz’s projection another boost.

While the depth chart is currently unknown, it’s obvious that GM Howie Roseman and the front office made bolstering Wentz’s group of targets a major priority in the 2020 Draft, specifically when the team called Reagor’s name in the first round.

The 5’11”, 195-pound, 21-year-old caught 43 passes for 611 yards and five touchdowns in his junior season at Texas Christian, but showed off his potential in a more potent Horned Frogs offense in 2018, when he caught 72 passes for 1,061 yards. He will likely be utilized in a variety of ways, in the backfield, inside and outside alongside Jeffrey, Jackson and Goodwin.

The Eagles threw the ball 58.8% of the time last season, which ranked 20th in the NFL in frequency, and averaged 23.2 points per game, which ranked 15th. In 2019, Wentz’s Intended Air Yards Per Pass Attempt was 8.0, but his Completed Air Yards Per Pass Attempt was just 5.8. His receivers also dropped 28 passes while 72.3% of his passes were on target.

Now, imagine if he was throwing to receivers with household names, like he will be in 2020!

With Miles Sanders and third-down, Darren Sproles-esque Boston Scott slated to handle most of the work at running back, the Eagles will likely continue to run the ball with efficiency, but it’s a given that Wentz and company will make some strides through the air, especially deep down the field.

Again, think about his weapons.

Jeffrey, Ertz and Goedert will be red zone nightmares for opposing defenses. The trio of Jackson, Goodwin and Reagor will make life awfully difficult for opposing secondaries, since all of them will have the ability to take the ball to the house every time they touch the ball due to their elite speed.

These Eagles can fly.

Since Jackson, Goodwin and Reagor will likely succeed in traditional man coverage, there will most likely be some kind of safety help over the top in three-plus wideout sets. That will not only open up running lanes, but it will free up short and intermediate passing lanes for guys like Ertz and Goedert to dominate.

Coach Doug Pederson and his offensive staff are probably already hard at work thinking of ways to mimic the well-oiled machine that is Andy Reid’s Kansas City Chiefs offense. Not only is Pederson a part of Reid’s coaching tree, but the type of speed on both of their rosters is unmatched anywhere else in the entire league.

All signs are pointing to this being one of the top overall offenses in the NFL and Wentz should thrive.

Tiz the Law Out in F