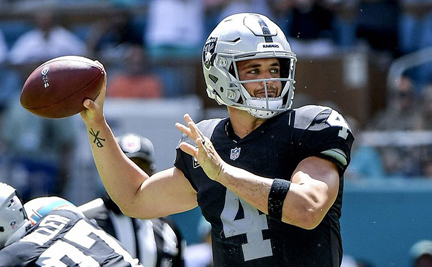 Despite a season with limited offensive weapons, Las Vegas Raiders signal-caller Derek Carr had an outstanding campaign. Here’s what it means for the team’s NFL season.

Derek Carr had the best passer rating of his career in 2019, signaling a positive turn for the quarterback.

The Las Vegas Raiders signal-caller ranked second in terms of throws on target and had the second-lowest percentage of bad throws.

The Raiders added a ton of speed at the wide receiver position this offseason, which will give Derek Carr more openings in the deep passing game.

In 2019, the Las Vegas Raiders (the Oakland Raiders at the time) only logged 56 passes that were considered “bad” via Pro Football Reference—better than any other team in the NFL. The New Orleans Saints and San Francisco 49ers were the closest teams to this mark.

If this stat is isolated to just one quarterback per team, then Saints QB Drew Brees slightly takes the lead with 10.7 percent of his throws ranked as “bad” compared to 11.0 percent of Carr’s throws. In terms of throws delivered on target, only Brees ranks higher than Carr, with 84.1 percent and 82.6 percent, respectively.

These stats are often overlooked, because the Raiders have only one winning season over the last 17 years. But Carr is the quarterback who led the team to its lone 12-win season. In 2019, Carr put up a respectable 70.4 percent completion rate with a career-high 100.8 passer rating and only eight interceptions. This career-year was during head coach Jon Gruden’s first season, so the veteran quarterback should be even better with more time in Gruden’s system.

Like free money? We thought so. BetQL offers exclusive deals if you want to bet on Derek Carr and the Las Vegas Raiders! Get in on the action here.

The Raiders prioritized upgrading their offense’s speed during the offseason with the acquisition of two wide receivers: Henry Ruggs III and Nelson Agholor. Ruggs III was the first receiver taken in the NFL Draft with the 12th overall selection. He ran the fastest 40-yard dash time at the 2020 NFL Scouting Combine, clocking in at 4.27 seconds.

Ruggs III was a star at Alabama this past season and looks to continue his success with the Raiders by creating openings for Derek Carr to throw to. Agholor is a more complicated figure, infamous for having many dropped passes with the Philadelphia Eagles. Another first-round pick, Agholor is a speedy receiver with potential, but he’s failed to cross the 1,000-yard hurdle as a pro.

Carr and Agholor seem like a great fit together, as the wide out should give Carr more separation and space to work with. The Raiders quarterback will deliver more on-target throws for Agholor than he is used to, which should reduce his drop rate. As long as Agholor has steady hands, he may also find himself having a career-year in Las Vegas.

Carr’s total for passing touchdowns (19.5) is even more shocking. Carr’s career-low is 19 touchdowns, but otherwise, he has reached 21 touchdowns or more with a career-high of 32. Carr’s low numbers can only be explained by the Raiders adding backup quarterback Marcus Mariota to the roster. The oddsmakers consider Mariotta a legitimate threat to Carr’s starting job, but it would be unwise for the Raiders to bench the second-most accurate quarterback in the league and replace him with Mariotta, who was benched last year by the Tennessee Titans in favor of Ryan Tannehill.

Essentially, these under bets bank on Carr being benched, so take the over on passing yards and touchdowns unless you think Carr will seriously regress this season. With added weapons, it feels like Carr will easily top these totals, earning you an easy win on those wagers.

Find out how you can use BetQL to dominate the NFL when the season begins!