This Week in the NCAAF: Top 5 Best Bets 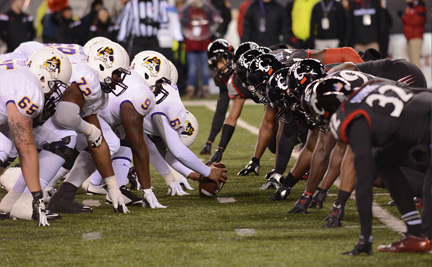 As another action-packed college football weekend approaches, let’s look at some good bets, from Cincy to Indiana, from Carolina to Louisiana and more.

It’s a strange time in the college football season. Most teams are into the meat of their schedules, some are deep into the second half, and others are only just now beginning.

Despite the confusion, some matchups appear to be solid bets this week. See if you agree.

The Lowdown: The East Carolina Pirates (1-5) are scoring 29 points a game while allowing 37. That’s bad. The Cincinnati Bearcats (6-0) are scoring 39 while allowing 12. That’s good. I’m not a statistician, but those outputs average out to a projected score of about 38-20 in favor of Cincy. Keep in mind, these are averages.

The Payoff: Cincinnati should be updating the scoreboard early and often on Friday night on its way to covering this 27-point spread.

The Lowdown: The Indiana Hoosiers’ 3-0 start has them in the national Top 10, and deservedly so. Of these three victories, two have come against the #8 and #23 teams in the country at the time. And while Indiana has been exceeding expectations, the Michigan State Spartans have been far below theirs. Their first loss was by an 11-point margin to the Rutgers Scarlet Knights, who Indiana then beat by 16 the next week. Their second came last week by 42 points at the hands of the Iowa Hawkeyes.

The Payoff: The stock on two teams is currently trending in opposite directions, making this one a pretty easy call. Indiana should win by a couple of touchdowns at least.

At WilliamHill.com, when you bet 50, you get 50! Start by registering a new-player account. When you make your first deposit of $50, William Hill will match it, dollar for dollar, up to 50 bucks!

The Lowdown: Both of these two teams have been pleasant surprises so far this season, but the CCU Chanticleers have by far been the bigger story. I don’t remember the last time this team’s name had a number in front of it, and they’ve earned their right this year, starting off 7-0. This is a complete team facing a very offense-heavy side in the Troy Trojans. The well-rounded squad usually wins, especially when they’re #15 in the country.

The Payoff: Easy. Give the edge to Coastal on the spread here.

The Lowdown: The logic here is pretty simple. The South Alabama Jaguars are a bad football team. The LLU Ragin’ Cajuns are a very good one. And the very good team should beat the bad team, by a lot.

The Payoff: Lafayette has far outperformed USA this year, particularly against common opponents. Coming off a 17-point loss to the aforementioned Coastal Carolina Chanticleers, expect South Alabama to continue spiraling against another very good team in Louisiana Lafayette.

The Lowdown: Another season of Jim Harbaugh and the Michigan Wolverines has proven to be very disappointing. This time, it only took three games for the season to be chalked as a let-down, and Harbaugh now has to face the reality of a likely losing season. The Wisconsin Badgers, on the other hand, are a Top 10 team who looked very strong in their first win before taking a couple bye weeks due to positive Covid-19 tests.

The Payoff: This spread would be far bigger if Wisconsin had played against (and beaten) the Nebraska Cornhuskers and the Purdue Boilermakers in those two weeks, but instead we got lucky and receive a gift spread of 3.5. Throw the house on Wisconsin this week.

There aren’t too many headline games coming this week. That being said, there are plenty of solid matchups and great lines worth exploring. Do your research and good luck!

iGaming Off to a Goo