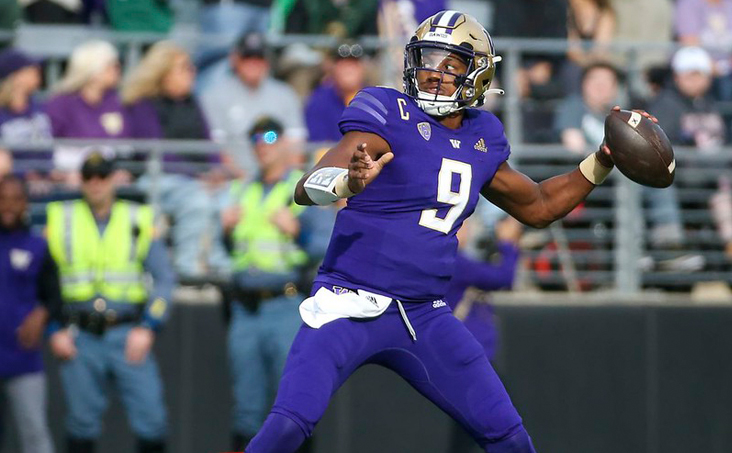 It’s Rivalry Week in college football and our NCAAF writer sees three games that should give bettors extra cash heading into bowl season.

It’s time to channel the Emperor Palpatine and let the hate flow just in time for the final big week of the 2022 college football season.

And do we have a slate of hate this week. Three rivalry games: two featuring in-state blood rivals and a third being one of the best intersectional rivalries in the country. And one comes with the extra bonus of perhaps being the last time these two play for a long time.

Yes, we were tempted by our TCU Horned Frogs friends giving 10.5 to the Iowa State Cyclones. Once again, the Horned Frogs found a way to win: the old, trusty, run-your-kicker-on-the-field and kick a walk-off field goal play. They didn’t find a way to cover the three points against the Baylor Bears, mind you. But you could do worse than take TCU, give the points and see how they stop your heart this week.

As you would expect, the Washington Huskies warmed up for the Apple Cup by beating the Pac-12 doormat Colorado Buffaloes into a fruit, juicy pulp. About the only thing more predictable than the 54-7 curb-stomping was Michael Penix Jr’s. yeoman-esque 229 yards and a touchdown passing in limited, spread-the-wealth duty.

As you would expect, the Washington State Cougars warmed up for Hate Week by working over the Arizona Wildcats, 31-20, giving them a three-game winning streak, extending their ATS streak to 4-0, and making the Cougars 8-3 ATS this year.

And as you would expect, the Huskies have this game etched in stone, even when you put aside the revenge factor of last year’s 40-13 WSU romp in Seattle. Washington holds an outside—OK, FAR outside—shot at reaching the Pac-12 championship game. So, you’re saying there’s a chance—If the Huskies beat their cross-state rivals, the Oregon State Beavers beats the Oregon Ducks in the Civil War, and the Cal Golden Bears beat the UCLA Bruins.

Put that aside for a moment and revel in what Penix has done for the Huskies this year. The left-handed transfer leads the country in passing yardage (3,869) to go with a 4.3-1 touchdown-to-interception ratio (26-6). What’s key to Washington’s success is Penix getting sacked only five times—a hidden stat against an underrated WSU defensive front-seven featuring All-American middle linebacker Daiyan Henley.

The Cougars’ counter with Cameron Ward (2,772 yards, 21 TDs). Unfortunately for them, Ward has been sacked an eye-watering 34 times. And unfortunately for WSU, the Cougars are 0-3 SU against ranked Pac-12 teams, albeit by a combined seven points.

No matter. The favorite is 6-1 ATS in the last seven Apple Cups, the same record Washington has in its last seven games against its rivals. We’ll enjoy a cup of cider to Penix and Co. making this 7-1.

Luck of the Irish Runs Out

Smoke, meet Mirrors. We make this introduction while trying to figure out how the Notre Dame Fighting Irish come into the L.A. Coliseum riding a five-game winning streak that brought a nearly 40-point-per-game average along for the trip.

Notre Dame QB Drew Pyne has drafted off a robust running game and reinvigorated defense, because he’s completed fewer than 53% of his attempts in five of his six starts. Last week, as the Irish were bludgeoning Boston College, 44-0, Pyne was throwing for only 156 yards and a score. That marked the third time in four games Pyne (1,706 yards, 19 TDs) has thrown for only one touchdown.

Contrast that with quarterback Caleb Williams of the USC Trojans , who shredded crosstown rival UCLA Bruins for 470 yards and two touchdowns in the Trojans’ 48-45 victory. He’s thrown for 19 TDs in his last four games, powering USC to an 8-1 record and No. 5 national ranking. The late Heisman buzz is coming in for Williams, who is a truly special talent, one pro scouts envision as a potential No. 1-overall draft pick.

Williams has literally carried USC into the cusp of the College Football Playoff, because the Trojans’ defense—even with national sack leader Tuli Tuipulotu’s 11.5 sacks—breaks about as much as it bends. The Trojans surrender 405 yards and nearly 27 points a game, totals that include allowing conference also-rans Stanford, Arizona and Cal 28 points or more.

USC can see the CFP finish line. But for the Trojans to reach it, they need to break Notre Dame’s four-game winning streak in this series, overcome a Notre Dame pass defense boasting eight interceptions in its last four games, halt the Irish’s 3-1 SU and 4-0 ATS record against ranked teams and extend two other trends in this series. The favorite is 7-2 ATS in the last nine games and the home team is 7-1 ATS.

Parting Shots in The War on I-4 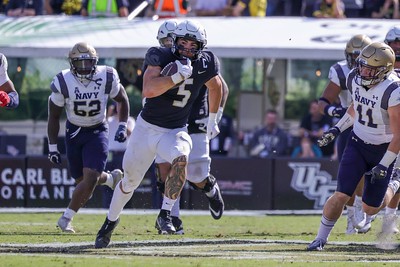 Let’s dismiss the formalities at the outset. The University of Central Florida Knights and University of South Florida Bulls dislike each other for reasons too numerous to get into in this space. In 2012, USF shot down UCF’s attempt to join the late Big East—indirectly helping kill that conference off. Since the “War on I-4” rivalry was formalized with a pair of trophies (one in football, one for overall sports) in 2016, UCF has owned the all-sports trophy and surrendered the football one just once—in 2016.

With UCF headed to the Big-12 next year, the “War on I-4” is about to turn from hot to cold, since there are currently no plans for these two to play going forward.

So we begin by asking how UCF can be favored by 18.5 points on the road one week after the Knights were rudely and inexplicably scuttled by a 4-7 Navy squad, 17-14?

Simple. USF is the worst defensive team in the country. The Bulls allow 513 yards and nearly 41 points a game. The yardage is the worst in the nation by nearly 20 yards and the points are second-worst only to Colorado. This explains why the Bulls are 1-10 and 0-5 ATS at home.

USF is 4-6 ATS, not that it matters with that atrocity of a defense. Conversely, the Knights surrender less than 20 points (19.7) a game. Now, throw in the hatred factor, mix in the fact UCF can still find a way to the American Athletic Conference championship along with the Knights’ top-15 offense (481 yards and 34 points a game) and Gus Malzahn’s team will stay out of its way long enough and get enough stops to validate its 5-2 ATS record in its last seven.