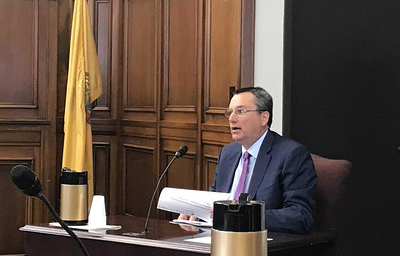 Three more states have signed off on the $17.3 billion Caesars-Eldorado merger, bringing to five the number of jurisdictions that have approved it, with 13 to go. It looks like management will meet its first-half timetable to close on the mega-deal. Eldorado CEO Thomas Reeg (l.) will helm the new company.

Eldorado Resorts’ acquisition of Caesars Entertainment has won three more state regulatory approvals as the $17.3 billion mega-merger continues on track with management’s timetable to close in the first half.

Thirteen states have yet to sign off on the merger, along with the Federal Trade Commission.

It was announced last June that Eldorado intended to acquire Caesars for $8.40 per share in cash and Eldorado stock, valuing the Las Vegas-based gaming giant at $12.75 per share, plus the assumption of some $9 billion in Caesars debt.

The new company will trade on Nasdaq and operate under the Caesars name, led by a board of directors comprising six of Eldorado’s current board members, including CEO Thomas Reeg, who will serve as CEO of the combined operation, and five of Caesars’ current directors, three of them appointees of financier Carl Icahn, who bought his way into a controlling position of the company early last year and was instrumental in engineering the merger.

Shareholders of both companies approved the merger in November.