Here is a first look at three of the newest online slot games on the market. Hold-and-re-spin for more chances to win at BetMGM and Borgata.

The igaming marketing platform, FirstLookGames.com has announced three of the newest games to hit the New Jersey online gaming market. All offer fun themes and some of the most popular game mechanics in the business.

The first is Rainbow Riches Crops of Cash and the developer is Light & Wonder. It has a Return to Player (RTP) of 96%, which reflects the percentage of all wagers on a game that are returned, collectively, to players as wins. It is also known as the payback percentage.

This is the latest in Light & Wonder’s Rainbow Riches series, the third title to feature the familiar leprechaun character as a host for game events. The base game is a five-reel 1,024-ways-to-win slot—the first in the series to include the scatter-pay setup with four rows of symbols instead of three. There are no paylines; wins are registered through adjacent symbols.

During base game play, the leprechaun character pops up to grant wild symbols, and figures prominently in the main bonus, a hold-and-re-spin event. Six or more coin symbols trigger the event, called Crops of Cash Respins. The coin symbols are divided into three categories, and each is valued at a multiple of the player’s bet:

When the feature is triggered, the coin symbols stay in place and other reels re-spin three times. Each time another coin symbol lands, it locks in place and the spin count returns to three.

During the re-spin event, every time two leprechauns land on the reels, an extra row of symbols is added to the grid, and the coin values “level up.” This can occur up to a total of seven times, for an 11-row grid hosting the hold-and-re-spin event, which can result in huge credit awards.

The feature continues until three spins yield no coin symbols, or until all spots on the grid have coin symbols. The coins are then added up and awarded to the player as a bonus.

First time players at Caesars Casino can earn a 100% match on their first deposit up to $500. Once the bonus is received, it can be used towards casino and slot games.

Just in time for Christmas, Santa Pets Slots from Swintt features a seven-by-seven grid—seven reels, seven rows of symbols and has a RTP of 96.48%. The Christmas-themed symbols include, as the title says, Santa and his three pets, including a dog, a cat and a rabbit.

The game play is unique. Adjacent symbols on the large grid return wins, and the winning symbols disappear. New symbols cascade down in their place, registering additional wins until no adjacent symbols appear. In other words, one wager can result in several wins.

The game is available at BetMGM and Borgata.

When you play online at Borgata New Jersey you are automatically a member of Borgata online rewards. That gives you access to exclusive offers, incredible experiences, and valuable rewards.

Sunstrike Supernova Out of this World 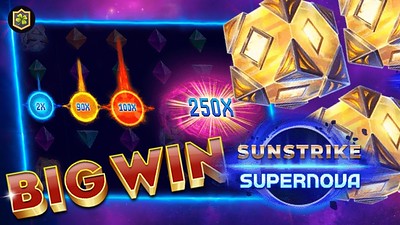 This extra-terrestrial themed Sunstrike Supernova by TrueLab Games features a six-by-five grid—six reels, five rows of symbols per reel and has a RTP of 95.68%. When eight like gem symbols land adjacent to each other, it forms a win. Those symbols disappear, and new symbols cascade down to the reels, potentially registering more than one win in a spin.

At the heart of the game is a great free-spin feature. Four or more scattered bonus symbols trigger 15 free spins. Random multipliers increase wins and the multipliers go up with each winning spin.

Also during free spins, “Supernova Multipliers” can land, starting at 2X and exploding to 90X, 100X or 250X, for huge credit wins.

The graphics and sound are great on this one, with the reels floating on an outer-space background, and comets shooting out behind the reels when wins occur.

It is available at BetMGM New Jersey and Borgata.

Got a friend who would love BetMGM as much as you do? Invite them to sign up and you can both earn a big bonus! Send a Refer A Friend invitation and once your friend signs up, gets verified, and meets our basic wagering requirement, you’ll both receive a bonus.