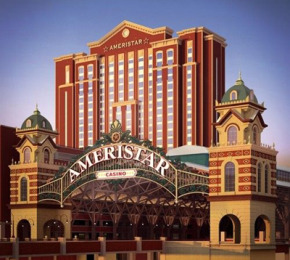 In addition, to avoid objections from antitrust regulators, as part of the arrangement, Boyd Gaming announced it will purchase for $575 million four Pinnacle casinos: Ameristar Kansas City and Ameristar St. Charles in Missouri; Belterra Casino Resort in Indiana; and Belterra Park in Ohio. Also, Boyd will sign a lease agreement with Gaming and Leisure Properties Inc. GLPI expects its total rent to increase by $46.1 million annually. Upon closing, Boyd will operate 28 properties in nine states. And one day later, Boyd Gaming announced it had agreed to purchase the Valley Forge casinos outside of Philadelphia.

Officials at Penn National, the leading U.S. regional gaming operator based in Wyomissing, Pennsylvania, said the purchase is expected to close in the second half of 2018. The deal would raise Penn National’s revenue stream by $2 billion and give it 41 properties across 20 jurisdictions in North America, excluding those acquired by Boyd, offering 53,500 slots, 1,300 table games and 8,300 hotel rooms in the U.S. The combined company will have 35,000 employees, up from 19,000, with annual revenue of about $5 billion, making it the third-largest domestic casino operator after MGM Resorts and Caesars, according to SunTrust brokerage.

Penn National Gaming Chief Executive Officer Timothy Wilmott said, “This was a very complex 4-party transaction and we took a look holistically at the deal and what we needed to handle regulatory approval at the state and federal level. By combining our highly complementary portfolios and similar operating philosophies, we will be able to leverage the strengths of both our companies and create an unparalleled experience for our regional gaming customers, while generating significant value for our shareholders and business partners. The combined company will benefit from enhanced scale, additional growth opportunities and best-in-class operations, creating a more efficient integrated gaming company.”

Wilmott added, “Going forward, we will have the financial and operational flexibility to further execute on our strategic objectives, while maintaining our track record of industry leading profit margins and generating significant cash flow to reduce leverage over time. We look forward to welcoming Pinnacle’s talented employees to our team and to further enhancing our status as North America’s leading regional gaming operator.”

In a call with analysts, Penn National Chief Financial Officer William Fair said the purchase of Pinnacle will enable the company to benefit from potential tax law changes, leading to additional potential acquisitions. The Pinnacle deal is expected to generate $100 million in annual cost savings within two years.

Penn National Senior Vice President for Public Affairs Eric Schippers stated, “We grew from a single racetrack back in 1972 to what is today the largest regional gaming operation in North America. We’re getting into new states like Colorado, Louisiana and Iowa, which opens up all kinds of new opportunities as we diversify our portfolio.”

Penn National will fund the purchase with cash from the Boyd sale, existing cash and new debt. Goldman Sachs and Bank of America Merrill Lynch have committed to new debt financing. J.P. Morgan served as he adviser to Pinnacle.

The purchase news comes one month after Las Vegas-based Caesars Entertainment announced it would buy Indianapolis-based Centaur Holdings LLC and its Hoosier Park and Indiana Grand casinos and race tracks in central Indiana for $1.7 billion in cash. The deal would give add to Caesars’ portfolio four of Indiana’s top five casinos in terms of gambling revenue. Caesars ready owns two Horseshoe-branded casinos in Indiana. The purchase is awaiting approval from the Indiana Gaming Commission and Indiana Horse Racing Commission.

In addition, earlier this year, Eldorado Resorts, which has a casino in Shreveport, bought Isle of Capri Casinos Inc. and its 14 casinos for $1.7 billion. Gaming and Leisure Properties bought Bally’s Casino Tunica and Resorts Casino Tunica in Robinsonville, Mississippi for $82.6 million.

And to add to its haul, Boyd Gaming announced that it had entered into a definitive agreement with Valley Forge Convention Center Partners, L.P., to acquire Valley Forge Casino Resort in King of Prussia, Pennsylvania, for total cash consideration of $280.5 million.

The Valley Forge property is one of two Category 3 casinos in the state, which, under the original 2004 state gaming law were limited to 600 slot machines and 50 table games, and were required to be attached to a hotel. The property became more appealing as an acquisition target after the state’s new gaming law eliminated “membership” requirements that imposed an annual entry fee or required that money be spent elsewhere on a property prior to entering the casino. The law also allowed for increases in the slot inventory.

The gaming law offered to eliminate the restrictions for a fee, which Valley Forge paid immediately.

The purchase price represents an implied multiple of 7 times EBITDA, including expected cost synergies and incremental growth from the property’s impending slot floor expansion, and before any operational improvements. Boyd expects the acquisition to be free cash flow-positive and immediately accretive to earnings.

“The acquisition of Valley Forge Casino Resort is another excellent opportunity to further grow and diversify our nationwide portfolio,” said Keith Smith. “With this acquisition, we will expand into the second-largest gaming state in the country, establishing a presence in a densely populated, high-traffic area just west of Philadelphia.

“And thanks to Pennsylvania’s recent passage of gaming expansion legislation, there are new opportunities to drive incremental growth at Valley Forge through the expansion of the property’s slot capacity and the introduction of new forms of gaming.”

Valley Forge features a 40,000-square foot casino with 600 slot machines, 50 table games and nearly 500 hotel rooms. The property also has eight restaurants and bars, and more than 100,000 square feet of meeting, convention and exhibit space. The property is located just two miles north of King of Prussia Mall, one of the largest malls in the United States.

Following the passage of gaming expansion legislation in November, Valley Forge eliminated its customer admission fee, and plans to expand its gaming capacity with the addition of 250 slot machines in early 2018, both of which are expected to drive increased customer traffic. Additionally, the legislation allows the property to offer online gaming within the state of Pennsylvania, as well as sports betting if permitted under federal law in the future, as well as the opportunity to bid on one of the state’s proposed 10 mini-casinos.

Smith added, “With the successful completion of our acquisitions of Valley Forge and the Pinnacle assets, Boyd Gaming will gain direct access to four of the nation’s largest gaming markets—Philadelphia, St. Louis, Kansas City and Cincinnati—with a combined population of nearly 10 million adults. We will expand our nationwide presence, operating 29 properties across 10 states. We believe this expansion will help drive additional growth throughout our nationwide portfolio, as we market our destination properties to these new customers in the Midwest and Northeast.”

The Valley Forge transaction is expected to close in the third quarter of 2018, subject to customary closing conditions and the receipt of all required regulatory approvals. The transaction will be financed with incremental debt financing.

As a result of the company’s substantial free cash flow, Boyd Gaming expects to continue its program of returning capital to shareholders through quarterly dividend payments and share repurchases.