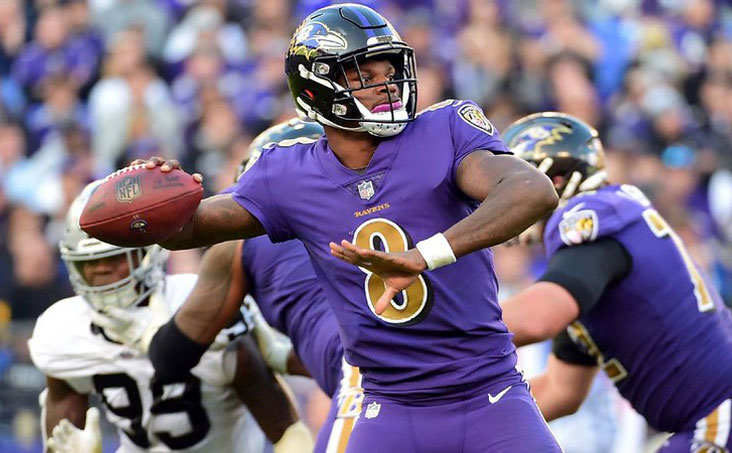 Target these five signal-callers for Sunday with value props for Jones, Darnold, Wentz, Jackson and Wilson including over/under passing yards and a rushing prop bet.

Not only does BetQL crunch the numbers for every moneyline, spread, over/under and first-half bet, but it also features NFL player prop values.

Read on to see the Top 5 bets.

It was somewhat surprising to see a pass-heavy Patriots offense in their 17-16 loss to the Miami Dolphins in Week 1. In that game, Jones went 29-39 for 281 yards, a touchdown and no interceptions while the team rushed 30 times for 125 yards. BetQL is projecting a low-scoring battle between the AFC East rivals with a 22.5-17 score in favor of New England.

It’s easy to see how this could become a ground-and-pound style game for the Patriots on offense, especially since they’re six-point favorites against rookie quarterback Zach Wilson. New England most likely won’t need to use their air attack in this contest, so betting under 244.5 makes a ton of sense, especially since BetQL is projecting him to throw for just 190. 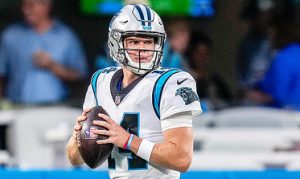 Sam Darnold went 24-35 for 279 yards and a touchdown in Week 1, but that was against the New York Jets. This New Orleans Saints pass defense just held Aaron Rodgers to 15-28 passing for 133 yards, no touchdowns and two interceptions.

BetQL’s model is projecting the Panthers to score 20 points in this contest and Darnold is projected to throw for 210 yards with a touchdown and an interception. Under 245.5 is clearly the best bet in this matchup.

Just in case you missed it: Get the BetQL Model’s outlook for quarterbacks in 2021!

Russell Wilson rushed just five times for nine yards in Week 1, but he delivered a wildly-efficient performance through the air, going 18-23 for 254 yards, three touchdowns and no interceptions in a 28-16 win over the Indianapolis Colts. Not only does BetQL project the Seattle Seahawks to score 30.5 points against the Tennessee Titans in this matchup, but it projects Wilson to rush for 40 yards.

Tennessee just gave up 38 points to Kyler Murray and the Arizona Cardinals and he didn’t have to overexert himself on the ground, rushing five times for 20 yards and a score. If Derrick Henry, AJ Brown, Julio Jones, Ryan Tannehill and company live up to their potential, this could be a Week 2 shootout, as evidenced by the 54-point total. That would improve Wilson’s rushing yard potential. 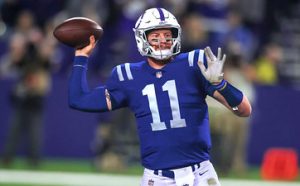 Carson Wentz went 25-38 for 251 yards, two touchdowns and no interceptions in a Week 1 loss to the Seahawks, but his team just generated 16 points. BetQL is projecting the Colts to score 22 points against the Rams in this contest, but Wentz will have an uphill battle against Aaron Donald and company. He’s projected to throw for 180 yards with a touchdown and an interception in this game after the Los Angeles Rams held Andy Dalton (27-38, 206 yards, 0 TD, 1 INT) and the Chicago Bears to 14 points in Week 1.

It wouldn’t be surprising for Indy to craft a run-heavy game plan after Chicago’s David Montgomery rushed 16 times for 108 yards and a touchdown, thus giving them the blueprint. That doesn’t bode well for over 235-plus passing yards for Wentz. 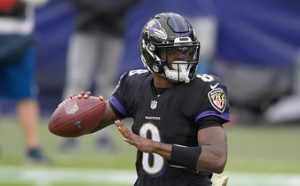 The Ravens-Chiefs game is going to be a lot of fun to watch and BetQL’s model is projecting Baltimore to score 26.5 points in a close loss. However, Lamar Jackson is going to put up numbers.

The model is projecting him to rush 16 times for 100 yards after he took 12 carries for 86 yards in a heartbreaking Week 1 loss to the Las Vegas Raiders. That’s well above the 10.5-rush prop, so take advantage!