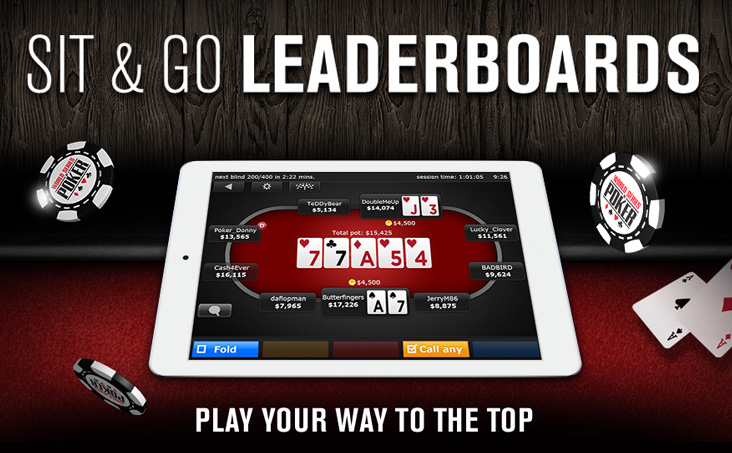 Want all the action of an online poker tourney, but don’t have time for a long game? Sit & Go is for you.

Players who want to test their skills in an online poker tournament have a lot of choices among poker sites in Nevada and New Jersey and can pick from a number of options to suit their own play.

And by suit your own play, we mean you can play it fast or grind it out old-school.

Basic Texas Hold’em is still the main poker variation for most online tournaments, but the amount of time it takes to play an old-school Hold’em game can be a little daunting, especially during major tournament events that draw big fields.

But online poker sites have come up with a lot of different ways to speed up the traditional format. One of the best examples is the Sit & Go tournament.

Sit & Go’s are quick and fun, and give you tournament action in a flash. Basically, a Sit & Go is a one-table tournament format. That might sound strange; just one nine-player table to get through to win it all? But when you think of it as starting every tournament at the final table, then things get more fun.

If you last, you’ll move quickly between a full table of opponents to just a few, and then to a heads-up fight for the title. Each time a player busts, it’s time to change your strategy and play more hands.

That kind of action takes an average of nine hours to get to during regular tournament play. Most Sit & Go’s are over in less than an hour.

WSOP.com is one of the great places to play Sit & Go’s. The site offers both six-handed and nine-handed games; generally, the top three players get paid. Obviously, you won’t see the big money of a major online tournament such as WSOP’s daily and Sunday tournaments, but Sit & Go’s can be a fine way to refine your game in-between big contests.

WSOP.com offers Sit & Gos daily, usually whenever nine players indicate they’re ready to play. The site also offers a monthly leaderboard contest for all Sit & Go Players. Play and cash in enough tournaments and you can get a share of a $1,000 cash payout ($250 for the winner).

PokerStarsNJ.com also offers up Sit & Go’s, but it’s got an even quicker variation of this very quick format called a Spin & Go. Just three players are seated at the table and a spinner decides the prize pool, which theoretically can be 1,000 times your buy-in (usually between $1 and $25). Levels last all of three minutes!

Doesn’t sound crazy enough? Well, you can choose how many tournaments you want to play—simultaneously.

We all know there’s great satisfaction in grinding out a long tournament win, but sometimes, you just need things to move along—you know, just Sit & Go.

Off To The Races