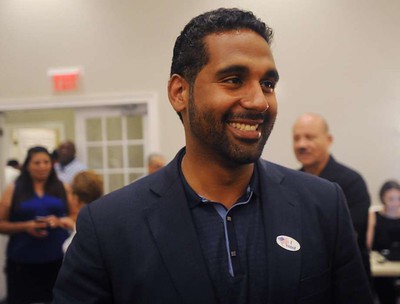 A bill that would give Connecticut’s gaming tribes the right to develop a commercial casino in the state’s largest city, Bridgeport, has been reintroduced. The bill would also legalize sports betting. Senator Dennis Bradley (l.) says he’s “ecstatic” at the prospect of an economic boost.

Two leaders of the Connecticut Senate have introduced a bill to authorize the state’s two gaming tribes, the Mohegans and the Mashantucket Pequots, a monopoly on sports betting and allow them to open a commercial casino in Bridgeport, the state’s largest city.

The bill would also authorize iKeno and three entertainment zones in Hartford and New Haven, as well as a third location to be determined later.

This 41-page bill is almost identical to the one introduced last year, but which Governor Ned Lamont opposed. Senators Cathy Osten and Saud Anwar, co-sponsors of the bill, are taking the side of the tribes, which already own the Foxwoods and Mohegan Sun casinos, two of the largest in the nation. They want to force Lamont’s hand, and compel him to negotiate and amend the existing tribal compacts by October 1. Legally, though, there’s no way they can require the governor to act.

Anwar issued a statement saying, “We are talking about a win-win strategy. If you look at the details, everyone wins. Not only will we have significant new investments in East Windsor and Bridgeport, but we have jobs for the people who will build these places.

“In East Windsor, we anticipate 2,000 jobs in building the casino and 2,000 more jobs when the casino is built and running. All of the neighboring towns, including East Hartford, Ellington and South Windsor, will also benefit, getting new revenue sources as residents work at these casinos and individuals travel through them to access the casinos. It’s the same in Bridgeport—new jobs will come not only where the casino is built but the surrounding areas. I am excited to support these plans and look forward to the project’s progress.”

Meanwhile, Senator Dennis Bradley, whose district includes Bridgeport, pronounced himself “ecstatic” that a bill is being considered that would bring a casino to his city.

In an interview with GGB News, Bradley said, “I’m elated about the prospect of us talking about a casino in this beautiful city. And for legislators from the eastern part of the state, who have a strong relationship with the tribes, to present meaningful legislation to do that.”

The bill is a compromise between the Bridgeport delegation, which last year opposed the tribes’ push for a third commercial casino, and supported a proposal by MGM Resorts International for a casino in Bridgeport—and the legislators from the eastern part of the state.

Those lawmakers are led by Osten, whose district includes both casinos. She has staunchly defended the tribes’ exclusive rights to offer gaming in the state. Something that MGM continues to challenge in all arenas, including the courts, legislatively and in the court of public opinion.

MGM Resorts, responding to a request for a comment by GGB News, stated, “MGM strongly believes that the best path for Connecticut, whether in establishing sports betting or moving ahead with a third casino in the state, is an open, competitive process.

“As we have said consistently, if Connecticut is to maximize the economic impact of a commercial casino license, a transparent, competitive process is in the state’s best interest. That is equally true for sports betting, and the most direct path to bring the greatest results for Connecticut taxpayers, economic growth and state revenue.”

Senator Bradley represents almost 80 percent of Bridgeport. He noted that there have been discussions of a casino “in meaningful ways” since the early 1990s, around the same time the tribal casinos were launching.

“It has been sort of a Santa Claus type of conversation that people talk about year after year. Bridgeport is a gem of a city and anyone who has ever driven by there will say what a beautiful place it is,” he said. “A casino lets us start to bring the dream of what Bridgeport could be.” He added, “It’s not a cure of all our woes but it’s a big leap forward in realizing all of our potential.”

Since this bill is very similar to the bill introduced last year, GGB News asked why it might have a better chance of succeeding. “It’s leadership,” said Bradley. “It always down to the people who are pulling that.” He added, “There is now a strong partnership with the delegation from the eastern part of the state and the Bridgeport delegation. They are going to lock arms.”

One way in which the bill is different is that it would distribute $88 million annually to municipalities, allowing them to reduce property tax rates.

He added, “There are some other things that the governor feels are important to the state that I would differ with him if he disagreed about this bill. Of the industries that I feel we should be investing with and supporting, the number one industry is in casinos. I would hope and expect his support for those things.”

As for the sports betting portion of the bill, Bradley said, “I feel that the tribes have been a partner to the state in meaningful ways and we have to make sure that the businesses that are here and have put in sweat equity benefit. The tribes have made it clear that sports betting will make them more prosperous and increase their profits. When someone is prosperous there will have to be a sharing of the wealth. I have no issue with the tribes getting sports betting in light of them making a significant investment that Bridgeport would get a casino.

James Gessner, chairman of the Mohegan Tribe, issued this comment, “I am very optimistic that my discussions with Governor Lamont will bear fruit. He and I agree that Connecticut has waited too long to modernize our industry and be competitive with our surrounding states.”

The chairman added, “The Tribal Council also has a great friend in Senator Osten and we are hopeful that the Connecticut General Assembly sees that through the Connecticut Jobs and Revenue Act every wins.”

The tribes are not showing a unified front on this proposal, however. Although in the past both tribes insisted that the state give them exclusive rights to offers sports betting, an official of the Mohegans last week indicated it might be willing to compromise on that point.

At the press conference where Osten announced her bill Chuck Bunnell, Mohegan chief of staff, commented during questioning, “I think my chairman and our tribal council has been pretty consistent that they believe that these are casino games that are covered under the compact, but the chairman has also expressed to the governor that we are also open to discussions, because that’s what partners do.”

At the same event Latoya Cluff, vice chairman of the Pequot tribal council, reiterated that her tribe feels that existing compacts call for any new market to be the exclusive provenance of the tribes.

This has led to speculation that the Mohegans are more open to a deal that would move sports betting forward quickly rather than fight over an extended period for a monopoly.

According to Senate President Pro Tem Martin M. Looney, this highlights the complexity of the issue. He told the CT Mirror, “This issue in particular, as we know, is a difficult one. It’s complex, because it contains so many different components that have to be negotiated and reconciled in order to move us forward.”

So far Governor Ned Lamont has offered low level support for the bill. “The administration is reviewing the proposal and will discuss this issue during the regular session,” said spokesman Max Reiss.

Under the existing arrangement, the gaming tribes pay the state 25 percent of revenue in return for exclusivity. Since the 1990s they have paid about $8 billion to the state.

If the state were to violate the exclusivity clause, by, for example, granting MGM a license to operate in Bridgeport, they would not be obligated to pay the 25 percent. Since the share the tribes pay has fallen from of peak of $430 million 13 years ago to $225 million in 2019, MGM has argued it can more than make up for that taxes it would pay for a Bridgeport casino.

The revived bill is seen partially as an act of frustration from legislators annoyed at the inability of Governor Lamont and the tribes to reach an agreement on sports betting.

It is also a return to the legislature being united around dealing with the tribes rather than MGM. In 2017 the legislature voted to authorize the Mohegans and Pequots to build a third, satellite casino in East Windsor. MGM vowed to fight it, and has been largely successful at delaying it.

MGM has sued, claiming that the Department of the Interior did not have the authority to issue a waiver for amendments to the existing tribal state gaming compacts.