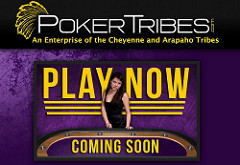 The Iowa Tribe based in Perkins, Oklahoma will invest $10 million in the Florida software company Universal Entertainment Group, developer of the first tribal-owned online gaming venture Pokertribe.com. The investment will give the 800-member tribe a 51 percent ownership stake in the company.

World Poker Fund Holdings Inc. was set to purchase the other 49 percent for $8.9 million from Universal Entertainment Group but that deal subsequently fell through. In a regulatory filing in September, World Poker Fund said it chose “not to move forward on the funding or to close the transaction due to further due diligence.”

Late last year the Iowa Tribe won an arbitration ruling with the state of Oklahoma that said internet gaming was covered under Oklahoma’s tribal gaming compact. However, under the terms of the compact, the gambling website will not be available to Oklahoma residents.

Originally set to launch in August, the Iowa Tribe said Pokertribe.com will offer real-money poker play starting in early 2017. Iowa Tribe Chairman Bobby Walkup said the tribe and Universal Entertainment Group are in the final stages of applying for a gaming license in the Isle of Man but the complex nature of the process has delayed the website launch. “I don’t envy some of the tribes coming behind us that will have to do this. There are a lot of steps and pieces to the puzzle,” Walkup said. Still, he said he’s confident Pokertribe.com will financially benefit the small tribe.

Iowa Tribe consultant Fereidoun “Fred” Khalilian said a gaming license from the Isle of Man will allow Pokertribe.com to offer online gambling in dozens of foreign countries. He added, “We want to make sure that the tribe is going to launch this the right way. We don’t want it to launch and then it gets shut down.”

Khalilian previously has been in trouble with the Federal Trade Commission for other business ventures. In the mid-2000s, he owned a short-lived nightclub with Paris Hilton in Orlando called Club Paris. However, Hilton never appeared regularly as promised and the venue eventually closed.

Also in July the FTC announced a $4.2 million settlement against Khalilian’s company, the Dolce Group Worldwide LLC, which, as My Car Solutions, “bombarded people with illegal robocalls and tricked them into paying thousands of dollars for bogus ‘extended auto warranties’.” As a result, Khalilian has been banned from telemarketing or from “making any misrepresentations or omissions when selling any goods or services” as part of the final court order in the Dolce Group Worldwide case, according to the FTC.

Two years ago, the Concho-based Cheyenne and Arapaho Tribes also had a deal with Universal Entertainment Group to launch the similarly named pokertribes.com website. The tribes paid the software developer $9.5 million to develop the website but it never launched, and the issue became entangled in litigation with the U.S. Department of the Interior. In 2014, the tribes abandoned pokertribes.com due to a “shift in business and tribal strategy and philosophy,” according to Cheyenne and Arapaho Governor Eddie Hamilton.