HomeThe ShuffleTribe Not Giving Up on Online Bingo

Tribe Not Giving Up on Online Bingo 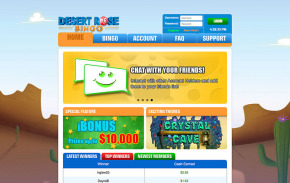 Despite being handed a devastating legal defeat four weeks ago when the United States of America as U.S. District Court for the Southern District of California ruled against its offering of real money online bingo, the Iipay Nation of Santa Ysabel remains confident that it will eventually prevail in the courts.

The reservation, about 55 miles from San Diego, claimed that it was “exerting its sovereign right under the Indian Gaming Regulatory Act (IGRA) to regulate and conduct Class II gaming from the tribe’s reservation.” Shortly after the tribe announced its website the state of California and the U.S. Justice Department filed suit and sought temporary injunctions. The site shut down shortly after, although the cases went forward and eventually the judge issued permanent injunctions.

The 700-member tribe argued that patrons were using a “proxy” to play the games, rather than playing them from outside of the tribe’s jurisdiction. In a press release the tribe said, “At no time is live bingo game action performed by the user. This ensures that all game play takes place on Tribal lands, under the jurisdiction of the Tribal government and is in compliance with all applicable laws and regulations.”

Battaglia disagreed, writing: “When IGRA and UIGEA are read together, it is evident that the phrase ‘on Indian lands’ was intended to limit gaming to those patrons who participate in the gaming activity while in Indian country. Were the Court to give IGRA the broad construction Tribal Defendants urge, under no circumstances would the United States be able to enforce UIGEA where some portion of the activity originates from servers located on Indian lands.”

The tribe apparently considers this a temporary setback. One reason is that the judge dismissed a claim by the state that the online casino violated the state tribal gaming compact. The judge noted that Class II games such as bingo and poker are legal under IGRA and the state has no say over online bingo—even if the federal government does.

What this means, say some tribal law experts, is that if the state of California ever legalizes online gaming, such as poker, that a tribe such as the Iipay, could operate outside of the state’s taxation and regulatory structure, just as tribes can operate other Class II games without state oversight.

The tribe is deciding now whether to appeal the ruling to the 9th Circuit Court of Appeals. If it is successful it would launch its Private Table poker website. Tribal Chairman Dave Vialpando told Online Poker Report: “The legal issues are the same, whether it’s Class II poker or Class II bingo. With a favorable ruling from the 9th Circuit we will not only be able to launch DRB but Private Table.” He added, “We would definitely launch our bingo and dust off our poker and decide whether it’s good business sense to launch. We would not see any legal barriers.”