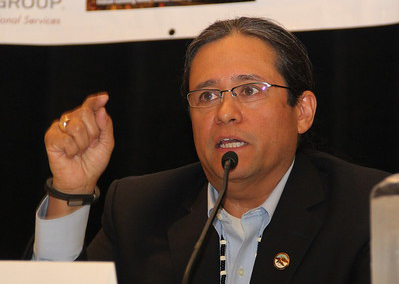 The roadblocks in the way of legalized sports betting in California began to evaporate last week when a coalition of tribes and state racetracks proposed a ballot measure that would allow tribal casinos and tracks accept such wagers. Mark Macarro (l.), chairman of the Pechanga Band of Luiseño Indians, says the measure gives Californian’s the “freedom” to bet on sports responsibly.

In an effort to legalize sports betting in California, a coalition of tribes and state racetracks last week proposed a ballot measure—the California Sports Wagering Regulation and Unlawful Gambling Enforcement Act—that would allow tribal casinos and tracks to participate in a sports betting industry in the state.

As currently written, the measure would “safeguard consumers and provide protections by:

There is no provision in the measure to allow mobile gaming, but supporters don’t want to specifically prohibit mobile betting in the event that it could be addressed in the future without passing another constitutional amendment.

The proposal is a significant event in the struggle to legalize sports wagering, and it immediately pits the tribes and racetracks against the state’s card rooms and possibly one of the most powerful unions, UNITE-HERE, a hotel workers group that has never been able to organize tribal employees.

The measure also sidesteps an effort by two members of the state Assembly, Bill Dodd and Adam Grey, to move another referendum forward—Assembly Constitution Amendment 16—that lacks many specifics, including who would be permitted to operate sports betting. Dodd wants to get all the possible participants in the same room, including the card rooms, which is not acceptable to the tribes.

The tribal-racetrack proposal is supported by 18 tribes, including the largest and most successful gaming operators across the state, including Pechanga, Morongo, San Manuel, Graton and others.

Mark Macarro, chairman of the Pechanga Band of Luiseño Indians, said that unanimity is important to the effort.

“Californians should have the choice to participate in sports wagering at highly regulated, safe, and experienced gaming locations,” he said. “We are very proud to see tribes from across California come together for this effort, which represents an incremental but important step toward giving Californians the freedom to participate in this new activity in a responsible manner.”

“We have historically been opposed to the expansion of gaming in California beyond the current scope,” said Anthony Roberts, chairman of the Yocha Dehe Wintun Nation. “This initiative represents a viable and measured path that provides Californians with the opportunity to wager on sports in a manner that is responsible and provides for real enforcement penalties for unlawful gambling in the state.”

This initiative provides for a modest expansion of gambling in California by allowing tribal governments and currently licensed horse racing associations to accept wagers on sports and athletic events at their gaming properties,” he says.

“A strong, well-regulated gaming industry is of utmost importance to California’s tribal governments and the public. This initiative allows sports wagering in a responsible manner and provides for transparency and strict regulation.

“California voters have, on numerous occasions, confirmed the exclusive right of California tribal governments to operate casino-style games. Legalization of sports betting should not become a back-door way to infringe upon that exclusivity.”

Kyle Kirkland, president of the California Gaming Association, which represents the state card rooms, told the Los Angeles Times that he hadn’t seen the proposal, but, “We would be disappointed at any initiative that allowed sports betting but that didn’t include card clubs.”

Most importantly for the tribes, it protects their tribal sovereignty by amending the constitution to allow sports betting and not impacting the sovereign status of the tribal nations.