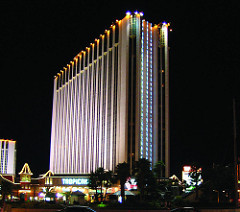 The Tropicana Las Vegas has seen hotel bookings fall 35 percent in the aftermath of the October 1 mass shooting on that Strip that left 58 dead and almost 500 wounded.

The Tropicana, located on the south Strip, not far where the shooting occurred at an outdoor music festival hosted on property owned by MGM Resorts International, saw the fall-off mostly in October and spilling over into November, said owner Penn National Gaming.

“Of the 35 percent increase in cancellations year over year (at the Tropicana), 80 percent of those were isolated to October and November,” said Penn President and COO Jay Snowden, speaking on a conference call to discuss the company’s third-quarter results.

“The cancellations were largely in the leisure-online travel agency segment,” he added. “In our group business, we didn’t have any cancellations and our casino block has held out very well. It’s really that leisure business that decided to cancel in the fourth quarter. We’ll see how it plays out in Q1 (2018).”

Penn is the first operator to quantify cancellations tied to the impact of the massacre, which was perpetrated by a lone gunman who rained automatic rifle fire on the festival audience for an estimated 10 minutes from a suite near the top of MGM’s Mandalay Bay. He reportedly killed himself as police closed in.

MGM is scheduled to report quarterly earnings on Wednesday, but it’s not clear whether the company will address cancellations.

Caesars Entertainment CEO Mark Frissora has said the company’s Strip properties have seen a decline, though Caesars has not detailed it to Penn’s extent and has stressed only that it’s mostly been seen among Asian guests.

“Because people in Asia are very respectful of the deaths that occurred, and they believe there should be a period of mourning,” he recently told the Las Vegas Review-Journal. “They wait for that period of mourning before they’ll return. I’ve heard that it’s sometimes a period of three months, four months, in that range.”

Wynn Resorts Chairman and CEO Steve Wynn addressed the impacts at some length during his company’s third-quarter earnings call on October 26, noting that Wynn has been working with MGM and Las Vegas Sands to develop plans for aiding victims of the shooting, two of them Wynn employees.

“The industry is getting together. We’re taking complete inventory of all of the damage that was done to the people there,” he said.

Wynn took the occasion of the call to emphasize the comprehensive nature of the measures his company has introduced, boosting security spending by $6 million-$7 million, to protect its properties from a similar disaster. They include experimental new technologies that can identify metal objects on a patron or underneath a patron’s clothing through a television screen.

“We beat the bushes to find out everything that we could throw at this problem to harden as a target, with the idea that if someone was looking at the hotel, they would see that we had met the threat level in a number of ways and they’d move on someplace else,” he explained. “This would be a tough place to survive for more than three minutes if you had a gun on you.”

On Penn’s call, CEO Tim Wilmott made it a point to applaud the Tropicana staff for their response to the tragedy.

“We had hundreds and hundreds of concert-goers come into our facility seeking shelter,” he said. “Our team there never trained for this, but they reacted heroically and were able to bring comfort, compassion, shelter, help the wounded get to health-care facilities, provide blankets, sheets, pillows to a large number of people who stayed overnight in our ballroom. They were the real heroes of our company that night. I wanted to say thank you again for a job well done.”