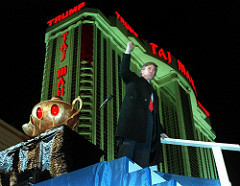 At the end-of-the-year press conference last week of the American Gaming Association, AGA President and CEO reviewed the major issues addressed by the association in 2016 and looked forward to a new year in which a former casino owner will be inaugurated as the 35th president of the United States.

Freeman expressed optimism that the major issues addressed by the AGA in 2016 are likely to move forward under the administration of President Donald Trump, giving particular attention to the effort to repeal the 1992 Professional and Amateur Sports Protection Act (PASPA), the federal law that bans wagering on sports in all but four grandfathered states—only Nevada among them that permits full wagering on single sports contests.

Freeman commented that Trump’s election itself is one of many indications that the gaming industry has moved beyond the old stereotypes to become part of the mainstream of American business.

“One of the great things about the entire 2016 election was we had a presidential debate in Las Vegas, and you had someone running for president who was a former casino owner,” Freeman said. “The act of owning casinos was never an issue. How some businesses were run, that may have been something someone pointed to, but the actual casino business was never called into question. I think that really does demonstrate that we’ve entered a new era for the casino industry.”

In reviewing 2016, Freeman said other indications that the industry has matured as a mainstream institution can be found in the decision of the National Hockey League to locate an expansion franchise in Las Vegas, and in the fact the NFL’s Oakland Raiders are considering a move to the gaming capital.

It’s an environment in which Freeman said will be perfect for the AGA’s 2017 agenda, at the top of which sits the drive to repeal PASPA—and Trump is on record saying sports betting should be legal. “We are entering a perfect storm of interests among broadcasters, among owners of individual sports teams—we have what’s clearly been 25 years of a failed law,” he said. “And now we have a president who was quoted as recently as a about year ago on Colin Cowherd’s show talking about the failed law that we have today and the benefits of regulation. I think we have everything coming together to support a regulated environment.”

Freeman added that the industry will not go it alone in its efforts on sports betting. “We want to work hand-in-hand with owners, with leagues, with law enforcement and other interested parties,” he said. “We’ve continued to do that this year, and we’ve made enormous strides.”

Other issues Freeman covered in anticipation of the new administration included Trump’s stance on immigration. He cautioned the incoming president not to allow immigration reform to morph into a situation where visitation from overseas drops—which would harm the gaming industry. “(We should create a) welcoming environment for foreign visitors, many of whom are interested in enjoying the casino gaming environment,” he said.

“We give a tremendous amount of credit to the Obama administration,” said Freeman. “They did a phenomenal job of strengthening America’s security while also placing a welcoming mat out and inviting visitors to come to the United States.”

Freeman ended the event on a positive note: “This is a remarkable transformation for the gaming industry, one that solidifies its place as a mainstream industry that is a critical provider of high-quality American jobs and needed tax revenue,” he said. “As a unified industry, we are better positioned than in any point prior to achieve our objectives.”

Freeman only touched on the issue of online gaming in a Q&A session at the end of the press conference, in which he said the AGA will watch efforts to address the federal Wire Act very closely—a reference to the Restoration of America’s Wire Act bill (RAWA), the current legislative effort to ban online gaming that is backed by Las Vegas Sands CEO and top Republican donor Sheldon Adelson—and that any progress on iGaming should not hinder the land-based industry.

“The issue of online gaming and efforts to work through Congress or the administration to address the current interpretation of the Wire Act is very important to us,” Freeman said. “It’s something we’ve followed very closely, and we’ve made clear for a couple of years that while we don’t have alignment in the industry as to whether or not real-money internet gaming should be permitted, we do have alignment that anything done in this area should not hinder brick-and-mortar casinos…

Coinciding with the press conference, the AGA sent a memo to the Trump transition team outlining some of the most critical industry issues.

“As a former casino owner, President-elect Trump understands many of the issues facing the industry,” the memo said. “However, given how much casino gaming has evolved in recent years, we write to provide a brief overview of the state of the casino gaming industry and our federal priorities for 2017 and beyond.”

The memo went on to outline the industry’s priorities for 2017 in detail, beginning with illegal gambling:

“Last year, AGA secured the commitment of the U.S. Justice Department to focus on illegal gambling enforcement, and the Federal Bureau of Investigation collaborates with us to solicit tips from citizens about illegal gambling activities. We look forward to working with your attorney general on this important issue that’s harming communities across the nation.”

“The casino gaming industry is building a broad coalition in support of repealing the nearly 25- year-old federal prohibition and giving states the opportunity to offer sports betting if they so choose. This position is shared by the National Basketball Association, owners across the four major sports leagues, the U.S. Conference of Mayors, National Council of State Legislatures and many others. We are pleased that President-elect Trump appears to agree with this approach.”

The memo went on to advise the transition team on the gaming industry’s efforts to instill strong anti-money laundering compliance, the issues surrounding off-reservation casinos in Indian Country, tax reform, immigration and other issues.

“We look forward to working with the Trump administration and the incoming Congress on a range of critical issues, from sports betting and illegal gambling to tax reform and immigration,” Freeman said in his message to the incoming administration. “The gaming industry has never been more united and better positioned to advocate for policies that promote growth and reinvestment.”