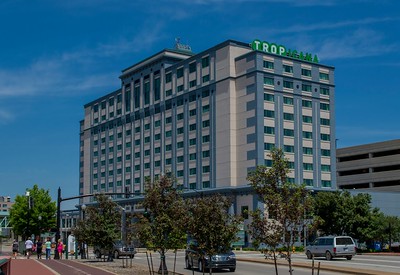 As part of its requirement to shed properties in the Eldorado Resorts merger, Caesars Entertainment Inc. sold Tropicana Evansville (l.) in Indiana. The buyers included Gaming and Leisure Properties and Twin River Worldwide Holdings. The purchase price was $480 million. Meanwhile, Twin River will become the Bally’s Corporation on November 9.

Caesars Entertainment Inc. reached agreement October 27 to sell its Tropicana Evansville casino in Indiana to Gaming and Leisure Properties and Twin River Worldwide Holdings for $480 million. Twin River will buy the casino operations for $140 million. GLPI, a real estate investment trust, will purchase the property itself for $340 million and lease it to Twin River for $28 million a year.

The deal could close by mid-2020, depending on regulatory approvals. Once approved, Indiana will mark Twin River’s 10th state where the company operates casinos.

Tropicana Evansville consists of a 45,000 square-foot casino, four restaurants, and a race and sportsbook. The complex also features 11,000 square feet of convention space adjacent to the casino and a Riverfront Event Center located across the street, according to CDC Gaming Reports.

In a separate deal, GLPI purchased Twin River’s Dover Downs in Delaware for $144 million, which will then be leased back to the casino company for $12 million a year. The two acquisitions allow Twin River to avoid going into cash reserves to contribute its portion of the Tropicana purchase, according to Casino.org.

As part of the approval of Eldorado Resorts purchase of Caesars Entertainment Corp., the Indiana Gaming Commission required Caesars to sell three of its five casinos in the state by year’s end. Tropicana Evansville is the first.

As part of the acquisition, Twin River obtains the rights to Tropicana’s sports betting and iGaming skins. On October 23, the commission approved William Hill to start offering online betting. However, online gaming is not yet permitted in Indiana, but could be on the agenda next year.

“It also provides us with access to an attractive Indiana gaming market, in which we will look to significantly advance our mobile and online sports betting and iGaming initiatives,” Twin River President and CEO George Papanier said in a statement.

Tropicana Evansville and Dover Downs will mark a new operating tenant for GLPI, which owns the land and buildings associated with gaming properties operated by Penn National Gaming and Boyd Gaming.

“We are excited to establish a formal relationship with Twin River as they represent another leading operator to add to GLPI’s growing platform,” GLPI CEO Peter Carlino said in a statement.

“We like the deal as it answers critics concerned over (mergers and acquisitions) and opens Twin River as a new partner for additional transactions,” Jonas said.

The four remaining Caesars properties are Horseshoe Hammond, located near Chicago, and Caesars Southern Indiana, located near Louisville, Ky., as well as Harrah’s Hoosier Park in Anderson and the Indiana Grand in Shelbyville. Caesars expects to retain Hoosier Park and Indiana Grand, both racinos less than an hour from Indianapolis. The company plans to expand table gaming at both properties.

Also last week, Twin River announced it would close the deal to buy the Bally’s brand from Caesars and change the name of the company to Bally’s Corporation, effective November 9. The ticker symbol on the New York Stock exchange will be BALY.

Soo Kim, chairman of Bally’s board of directors said in a statement, “The Bally’s brand embodies a rich history in American gaming and entertainment, aligns perfectly with our current and future growth strategy, and is ripe with untapped innovation potential to help us launch future entertainment services. We thank Caesars Entertainment for entrusting us with one of the industry’s most iconic brands.”

George Papanier, president and chief executive officer, commented, “This is an exciting and transformative moment for our company as we unite the high-quality customer offerings that span our increasingly national footprint under a singular preeminent brand. The Bally’s brand is core to our drive to become the first omni-channel gaming company to seamlessly integrate and operate physical casinos with digital solutions. We remain committed to employing our disciplined acquisition strategy, and leveraging regulatory incumbency as well as our retail customer database, to take advantage of the incredible growth potential that an online future offers.”

Circa Resort Opens i