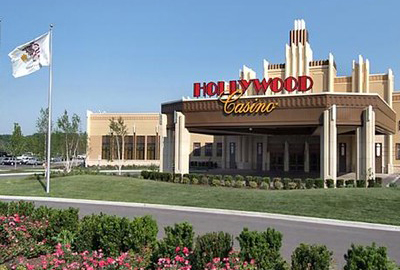 Illinois now offers bettors six sportsbooks, the latest two opening on Thursday, August 20 at Hollywood Casinos in Aurora and Joliet, both owned by Penn National Gaming, increase the number of places sports betting is available in the state of Illinois to six. Earlier this month, William Hill launched its sportsbook at Grand Victoria Casino in Elgin and DraftKings debuted its venue at Casino Queen in East St. Louis.

In March, prior to Covid-29 closures, sportsbooks opened at Rivers Casino in Des Plaines and at Penn National’s Argosy Casino Alton. Altogether, the Illinois Gaming Board has issued eight sports betting licenses; FanDuel’s sportsbook at Par-A-Dice in East Peoria and PointsBet’s operation at Hawthorne Race Course haven’t opened yet.

Of the state’s six active sportsbooks, only BetRivers at Rivers Casino and DraftKings at Casino Queen offer online wagering. First, however, bettors must register in person at the casinos.

Hollywood Aurora offers four ticket windows and 10 self-service kiosks for placing sports bets. Aurora Mayor Richard Irvin, who placed the ceremonial first bet at Hollywood Aurora for $20 on the Chicago White Sox to defeat the Detroit Tigers, said, “It has been a little nerve-wracking. We’ve been on pins and needles hoping this day would come so we can infuse some excitement and energy back into gaming, especially sports betting. The hope is sports betting takes the revenue back up to a very respectable amount for the city as well as Hollywood Casino and their investment in the city.”

Hollywood Aurora General Manager stated it took nearly three months to open the sportsbook, due to the Covid-19 shutdown, then steps to reopen. He said, “I think we’ve partnered with the right people. We’ve got Kambi, we’ve been working with them closely on all the equipment and technology and they’ve been very helpful. I think the biggest thing was working super closely with the regulators. It’s new to the state, new to Illinois, new to this property with Penn despite it having a lot of other properties.”

Moore added he’s not concerned about sports-betting over-saturation of the Chicago-area market. “What we’ve seen at a lot of other places is sports betting is largely contingent on the size of the population. Chicagoland is a huge metropolitan area,, so I don’t think anyone is overly concerned about not getting a big enough piece of the pie to be viable. I think it’s just another way we can offer something for everyone here,” he said.

At Hollywood Joliet, the sportsbook is not adjacent to the gaming floor, like Aurora, but it’s a destination, located one floor above the main gaming area, part of 99 Hops House. There, bettors can order food and drinks and watch games on 37 TV screens and two large projection screens. A casino regular placed the first wager. It offers five ticket windows and six self-serve kiosks nearby, plus eight additional self-serve kiosks located throughout the gaming floor.

Hollywood Joliet Vide President Lydia Garvey noted, “Not knowing when we were going to reopen was the biggest factor for us. Making sure the people we hired when we thought were going to open in March, who still wanted to work for us, and how we were going to get the licensing and training pieces done were major concerns.”

Garvey added, “We’re very happy with the set-up. We think that here in Hops House with all the TVs and great food, it’s a great environment and we’re looking forward to being the place to watch games.”

Masks and social distancing still are mandatory at all 10 Illinois casinos. “We took a very diligent approach to the sportsbook, the same way we have with reopening the casino. Our focus was on being safe, being cautious and being responsible. We wanted to make sure we did it right instead of doing it fast,” Garvey said.