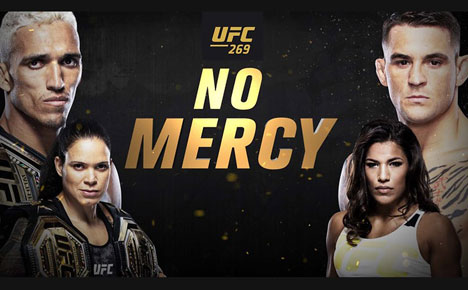 What’s better than one UFC Championship bout? Two, of course! UFC 269 will feature a pair of title defenses: Amanda Nunes vs. Julianna Pena, and Charles Oliveira vs. Dustin Poirier.

This Saturday, UFC 269 will feature a pair of title defenses at T-Mobile Arena in Las Vegas.

Amanda Nunes will put her women’s bantamweight belt on the line against Julianna Pena, while lightweight champ Charles Oliveira squares off with Dustin Poirier in the evening’s final bout.

Before the main events, there are three other fights on the main card, with 10 preliminary contests before those. The other three main bouts are:

Here are some tips and predictions for UFC 269.

Score a TKO at BetRivers, where your first deposit will be matched dollar for dollar up to $250.

Will Neal’s DWI be a Distraction? 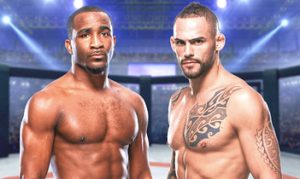 Welterweight Geoff Neal was arrested in Texas on Thanksgiving, charged with driving while intoxicated and carrying a firearm. Neal’s attorney said a blood test will show that Neal was below the legal limit of 0.08 percent. If that’s the case, the DWI as well as the gun charge will go away, since he was licensed to carry.

Meanwhile, UFC is allowing his fight against Santiago Ponzinibbio to stay on the card. And Neal told reporters he won’t allow the DWI to be a distraction.

This is one of the most evenly matched fights of the night, at least according to oddsmakers. Both fighters are -112 to win. But Neal is coming off his second straight loss, while Ponzinibbio won his last bout.

Both fighters have knockout power, but this one will probably go to a decision that favors Ponzinibbio.

New bettors at Golden Nugget Sportsbook receive up to $250 in Free Bets! Sign up and start betting today.

Pena Will Try to Back Up Trash Talk 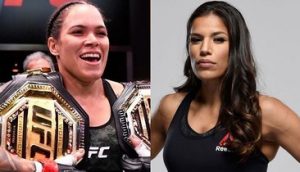 Julianna Pena has wanted to fight Amanda Nunes for years, even begging UFC President Dana White for a chance at arguably the greatest woman MMA fighter of all time. Pena told reporters that Nunes can’t be considered the GOAT (greatest of all time) until the two face each other.

Pena should be careful what she wishes for. Nunes is a huge -770 favorite. And though the “Venezuelan Vixen” is using her longshot status as motivation, sadly, that won’t be enough. Pena will learn firsthand why Nunes is considered the best. Saturday’s title defense will only cement the champ’s legacy.

Silva Looking for Another Knockout 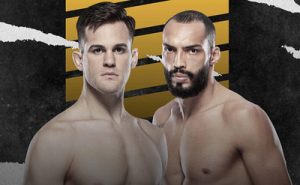 Bruno Silva has a knack for knocking out his competition. In 21 wins, 18 have been by knockout. He’s hoping for No. 19 against Jordan Wright when the two meet in a middleweight match on the undercard at UFC 269.

Silva predicts another knockout. Though Wright only has one defeat in 13 fights, his chin has been questioned and could be vulnerable if Silva lands one of his devastating right hands.

Look for Silva to land punches and get to Wright. This could be an early knockout. 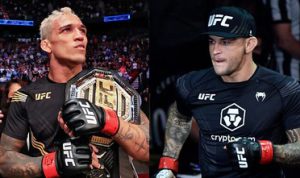 Even though Charles Oliveira is the lightweight champion, he comes into his first title defense as a healthy +135 underdog to Dustin Poirier, who is at -165. Also at stake is Oliveira’s winning streak of nine fights.

Oliveira has two methods to finish off his opponents. He has the UFC record for submission victories with 14, and also has been showing knockout power as of late, with three of his last five wins by either KO or TKO.

Poirier, who’s won eight of his last nine fights, is a tactician in the octagon. He should give Oliveira everything he can handle. We like him to pull off the upset and claim the lightweight belt.

Get Ready for UFC Vegas 269