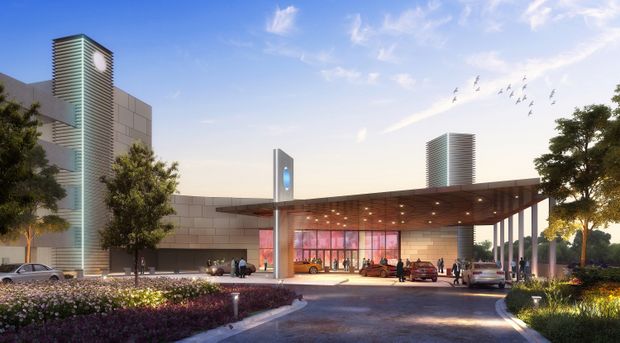 U.S. Interior Department attorneys have asked a federal judge to dismiss a lawsuit filed by MGM Resorts International challenging is decision to allow an amendment to the gaming compacts between Connecticut and its two gaming tribes. The amendment allows the Mashantucket Pequots and the Mohegans to operate a casino called Tribal Winds (l.) in East Windsor, 14 miles from MGM Springfield.

The U.S. Department of the Interior has asked a federal court to dismiss a lawsuit brought by MGM Resorts International challenging the department’s action in approving amendments to Connecticut’s tribal state gaming compacts.

The amendments would allow the state and its two gaming tribes, the Mohegans and Mashantucket Pequots, to build a third satellite casino in East Windsor, just 14 miles from MGM Springfield in Massachusetts. MGM argues that the approvals were in violation of the Indian Gaming Regulatory Act (IGRA).

The unusual thing about the casino is that it is a tribal casino operating as a commercial casino on non-tribal land. It is also a joint venture of the two erstwhile rivals, who operate the Mohegan Sun and Foxwoods.

MGM filed its challenge in August. In the Interior’s response, the department’s attorneys argued that MGM sought “to recast these amendments as approval of the commercial gaming facility in order to argue that Interior failed to comply with inapplicable legal requirements.” The document continues “… (T)he amendments merely confirm that the operation of a state-sanctioned commercial facility by a state-charted tribal joint venture does not violate the exclusivity provisions of the tribes’ MOUs with the State.”

MGM has fought a scorched-earth campaign to slow down or halt construction of the East Windsor casino. It was largely successful in delaying the Interior action for longer than a year.

Its lawsuit followed a proposal in the Connecticut legislature that called for the tribes to invest in a commercial casino in the state’s largest city: Bridgeport. MGM had first made a proposal for a commercial casino in city. It argued that, even if the state lost the 25 percent payments from the tribes for breaking the compacts, that the Bridgeport casino would more than make up for that loss in tax payments resulting from tapping the New York City market.