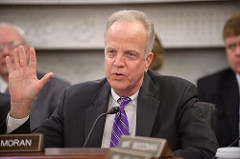 U.S. Senator Jerry Moran of Kansas has introduced a bill in the 115th Congress that could impact daily fantasy sports and sports betting. The draft legislation defines “chance” as a bet or wager involving “(1) a random or unpredictable event or (2) an event over which neither the gaming sponsor nor the person purchasing the chance has control over the outcome.” A 23 percent tax would be imposed on any company that offers games of chance, although the measure is vague on whether that includes DFS companies or Nevada sportsbooks.

FanDuel and DraftKings have consistently claimed their games are skill-based. However, in a 2014 letter to FanDuel from the New York Attorney General’s office, “No court has directly addressed whether fantasy sports contests are games of skill.” In other legal actions, both the U.S. Justice Department and the NFL said traditional sports betting involves skill.

Generally speaking, games of games of chance frequently have been banned or have been subject to strict in many states, but skill-based activities usually are allowed.

Moran’s bill, the “Fair Tax Act of 2017,” also would abolish the Internal Revenue Service and repeal the federal income tax, replacing it with “a national sales tax to be administered primarily by the states.” No hearing or vote has been scheduled. A similar version of the bill was introduced in 2015 and was not enacted.

Later this month, the U.S. Supreme Court will consider whether to hear the long-running legal battle between New Jersey Governor Chris Christie and several sports leagues regarding sports wagering.