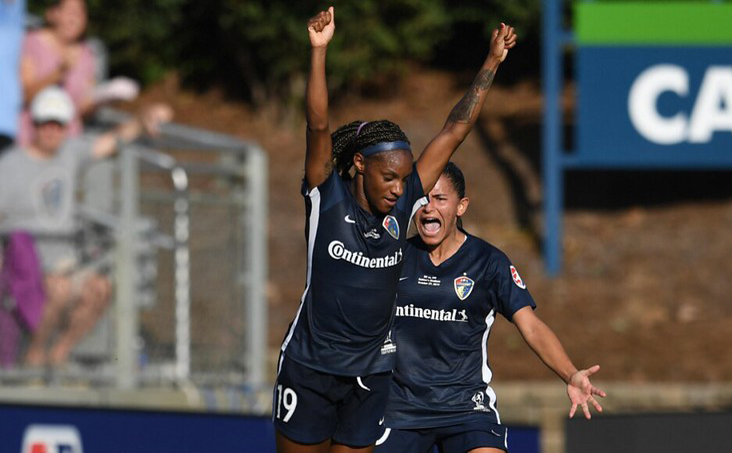 Soccer has been returning throughout the world, and U.S. players are finally getting out on the pitch too. The women will kick it off as the NWSL take the field June 27. MLS and USL are coming back in July.

Fortunately, just about every professional league in the U.S. has begun to return or is planning a comeback. When it comes to soccer, “ladies first” may apply. It’s beginning to look like the National Women’s Soccer League (NWSL) may be the first pro league to return to action post-lockdown.

The league will return to the pitch on Saturday, June 27, when the NWSL Challenge Cup kicks off. This month-long tournament will feature a group stage and a knockout stage, all leading up to the final on July 26. The tournament will serve as a pre-season tune-up for the players, who undoubtedly will aspire to hoist the first trophy the U.S. has seen in months.

All NWSL Challenge Cup fixtures will take place in Utah. Group-stage fixtures as well as the first round of the knockout stage will take place at the home pitches of the NWSL’s Utah Royals FC, MLS’s Real Salt Lake and USL Championship’s Real Monarchs. The semifinals and final will then be played at Rio Tinto Stadium in Sandy, Utah.

To protect the health of players during this return, all team members of any rank will be tested for Covid-19 48 hours before they leave for Utah and as they arrive. There will be further testing administered throughout the teams’ time in Utah as well.

In the U.S., Challenge Cup games will be broadcast by CBS-TV or CBS All-Access; outside the U.S., they can be seen on Twitch.

Create a new account at PlaySugarHouse.com, and your first deposit will be matched 100% up to $250… because YOU deserve more!

As far as Major League Soccer goes, unfortunately, there’s a lot more uncertainty. Currently, only three significant details have been shared about the MLS’ coming tournament:

The timing is especially bad for the MLS, as it just finished a CBA negotiation for the record books. The league and players’ association agreed to a new collective bargaining agreement back in February, but it was never completed. The Covid-19 lockdown allowed for a re-negotiation, which escalated to the point of league lockout rumors.

The parties finally reached an agreement last week, avoiding a lockout and getting the league moving on this unnamed Orlando tournament. But a lot of players are not ecstatic about the agreement.

The new CBA will see north of $100 million in reductions, including a universal pay cut of 7.5% for this season. Players can decide when the pay cut goes into action, but that won’t affect the set amount in salary cuts they’ll see at one point or another.

As a result of Covid-19, the length of the deal is now a year longer than originally planned, so previously agreed-upon salary bumps will also be delayed by a year. The agreement now runs into 2026.

While players aren’t particularly happy about salary changes and lack of protection in the new deal, they will unquestionably be very excited to get back out on the pitch. The headline here is that there’s a season to look forward to, as early as next month.

Register an account at BorgataCasino.com, and your first deposit will be matched 100% up to $600. You’ll also get $20 in Bonus Dollars!

Finally, the USL Championship has also announced its return. The USLC is the little brother league to the MLS, so its return is just as significant. Last week, the league announced a return date of July 11. While format and details are yet to be announced, a start date in mid-July is a very positive outcome that will allow for all three major U.S. soccer leagues to be back into the swing of things this summer.

After months of speculating about when leagues (specifically in the U.S.) could return and how they’ll do it, it’s nice to be able to have concrete plans and something to look forward to. Sports in the U.S. are finally returning (!), and not a day too soon.

Double Your Fun with