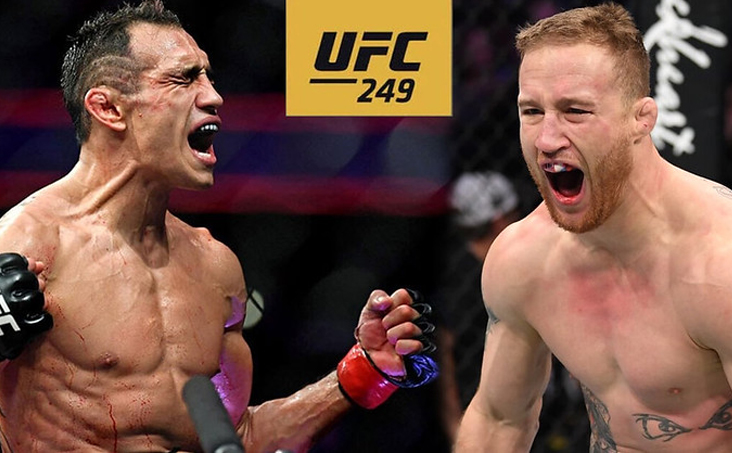 UFC 249, originally slated for April 18, is off the mat and ready to go Saturday, May 9 at 10 p.m. ET from Jacksonville, Florida, without spectators. Here’s the blow by blow.

Think there’s nothing to bet on? Think again.

UFC 249 was originally scheduled for April 18, but was cancelled, like everything else, due to Covid-19.

Luckily for fight fans, it’ll go off this Saturday, May 9 at 10 p.m. ET, from VyStar Veterans Memorial Arena in Jacksonville, Florida.

Fight night will take place without spectators, but you can be ringside for all the action. Just tune in at ESPN and ESPN+.

Create a new player account at PlaySugarHouse.com, then make your first deposit. You’ll get a 100% deposit match up to $250—because you deserve more!

Tony Ferguson is favored against Justin Gaethje in a lightweight interim title bout. The winner will face Khabib Nurmagomedov, one of UFC’s top pound-for-pound fighters, in the fall.

The UFC also announced fights for May 13 and 16, providing an unprecedented three fight cards in eight days; the card hasn’t been finalized.

For many sportsbooks, UFC 249 could become the most highly wagered event since the coronavirus crippled the sports scene.

As a result, the prop board expanded over the weekend, as different sportsbooks offer varied type of betting.

Betting on UFC: Know the Difference

There’s a key distinction in wagering on UFC versus boxing. When you bet a fighter to win by knockout, technical knockout or disqualification, it doesn’t cover every possibility of the fight ending early. A submission has the same effect on the fighters as a knockout, but it’s a separate bet. If you wager on a knockout and it ends in a submission, you lose.

There’s a bet called “To Win By Finish,” incorporating all possibilities of the fight not going the distance, including the submission. It also pays lower odds.

With a combined 17 post-fight performance bonuses, Ferguson and Gaethje have been two of the most exciting UFC competitors over the last several years.

Here are some other notable bouts and odds at PlaySugarHouse.com. These won’t change much among different books. What will change is the variety of prop bets offered.