HomeThe ShuffleUFC 250: Nunes vs. Spencer in the Main Event

UFC 250: Nunes vs. Spencer in the Main Event 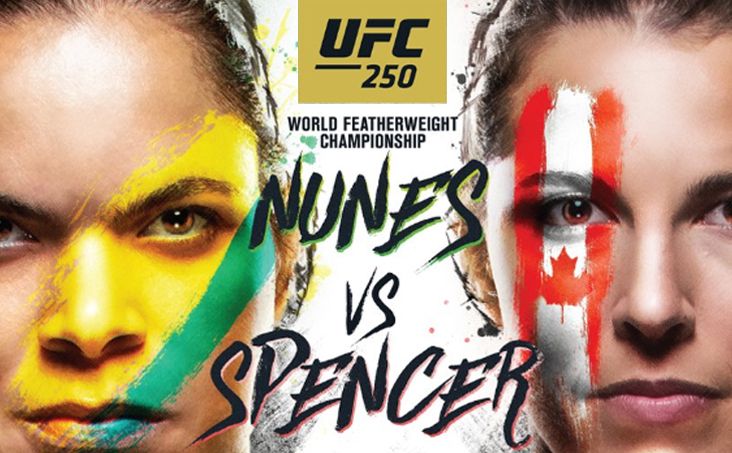 The battle, originally slated for May 9 in Sao Paolo, was cancelled because of the coronavirus outbreak. It’s now slated for 10 p.m. ET from the UFC Apex arena in Las Vegas (prelims begin at 6 p.m.). This is the second UFC card to be broadcast since the Covid-19 lockdown began, one million years ago.

Brazilian-born Nunes, 32, is one of the winningest women in MMA. She’s won her last 10 fights—the longest streak by a woman in UFC history—and is only the second UFC double champion to defend two UFC belts. She comes to this bout with a 19-4 record.

Pretty impressive, but her opponent is no palooka. Canadian-born Spencer, 29, brings an 8-1 record to the headliner. The former Invicta FC champ memorably landed a first-round TKO in her bout with Zarah Fairn in February.

Nunes is listed at -600 over Spencer. That makes her the biggest favorite on the card per William Hill, with Spencer priced at +450.

But there’s no sure thing in fighting. As the sportsbook points out, the underdog has come out on top in every one of the last five UFC main events: Charles Oliveira, Justin Gaethje, Glover Teixeira, Alistair Overeem and Gilbert Burns.

Sign up to wager at CaesarsCasino.com, and get a $25 free bet with a $50 losing wager. Just bet $50 in cash on the UFC 250 winner for one or all five of the Main Card fights before they begin.

In the co-main event, Cody Garbrandt (-150) will meet Raphael Assuncao (+125) in a bantamweight fight for the spot once held by Henry Cejudo. Cejudo announced his retirement in May after routing Dominick Cruz at UFC 249.

So, who’s to like in this bout? Both Garbrandt and Assuncao are coming off losing streaks, and Garbrandt hasn’t competed in more than a year.

Place your bet at PlaySugarHouse.com, and you’ll receive a 100% match deposit up to $250. Talk about easy money! Create your account today to qualify.

Double Your Fun with