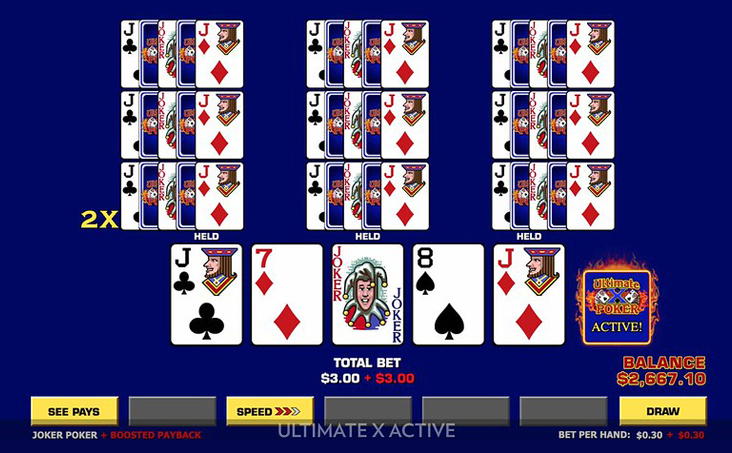 In Part 3 of this series, slot master Frank Legato explains the best way to choose from the increasing number of online video poker games, as well as multiple-bonus and multiple-hand features.

Video poker is the traditional machine game that comes the closest to table games in terms of overall payback percentage. In fact, it exceeds that return to the player in most cases.

For the novice, it may be hard to pick one from the many variations of the basic online poker game.

In the first two parts of this series (see Part 1 and Part 2 here), we covered all the most basic video poker games, beginning with Jacks or Better and moving on to all the varieties of Bonus Poker, which rewards four-of-a-kind hands of Aces, 2s, 3s or 4s. We also covered the two basic wild-card variations, Deuces Wild and Jokers Wild.

In all these games, choosing the right discards in the draw poker game can reduce the house advantage to near zero. And in some cases, it can actually convert the game to the player’s advantage.

The above versions of video poker have been in casinos for decades, and are easy to find online. However, some specialty video poker games are great choices.

One of the best is the first IGT game available online that offers a slot-style bonus feature, in this case a win multiplier. 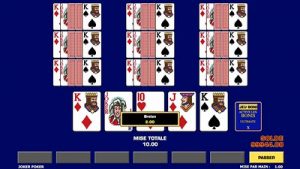 In the past, many manufacturers created video poker games with special features. One memorable offering was “add-‘em-up,” which paid a four-of-a-kind reward for, say, three 4s with two 2s. Add ‘em up, and you got a quad payoff.

However, the vast majority of those games took something away from the basic pay schedule to pay for the bonus—for example, the pay for two pair would be reduced from 2-for-1 to 1-for-1. The reduction in the payoff for this or other hands in the pay schedule was meant to compensate the casino for the cost of offering a bonus. For players, though, it meant a lower overall return, even with perfect strategy.

IGT solved this problem with a simple innovation: the bonus would be paid for with a higher per-hand bet. To qualify for the bonus feature, the player would be required to wager more than five credits as a maximum wager for one hand. This allows the bonus to be offered without changing the basic pay schedule. The knowledgeable player can still employ the strategy he or she has learned to reduce the house advantage, with the same pay table—the full expected return and a bonus that actually is a bonus. Because of the higher wagers, the game remains profitable for the casino. Everyone is happy.

Create your new player account at TropicanaCasino.com, and you’ll be eligible to get $100 cash back—that’s real cash, not bonus money. Get started today!

IGT continues to produce several casino video poker games offering a variety of bonuses in exchange for higher per-hand wagers. But the most popular by far has been Ultimate X Poker, which is now available online in New Jersey and other jurisdictions.

With a normal five-credit per-hand bet, Ultimate X plays like any other video poker game. However, by betting 10 credits per hand, you activate the “X” feature, the multiplier. When this is active, any winning hand causes a multiplier ranging from 2X to 10X to be applied to any win on the following hand.

For example, say you land a high pair on basic Jacks or Better, winning 10 credits. A multiplier of 5X appears. On the following hand, you hit another high pair. This one pays 50 credits, and generates another multiplier—let’s say it’s the maximum 10X. The next hand is a pat flush, which normally pays 30 credits at max bet. This time, it pays 300 credits. And another multiplier for the following hand. Wins continue to be multiplied until a losing hand happens.

Play and earn free spins all month at HarrahsCasino.com through July 31. Make a deposit and your reward is based the online tier credits you earn. Have a ball!

For the video poker player who is proficient at the strategy of the game being played, the beauty of Ultimate X Poker is that it increases the overall return of each game when played with ultimate strategy.

Sure, a few tenths of a percentage point may not be much of an increase, but remember, you’re getting that multiplier bonus as well, which can turn an average win into a huge win.

(You won’t find the top pay schedules that provide player advantages normally in Ultimate X mode, since with perfect strategy, games like Double Double Bonus and Deuces Wild already return above 100 percent. You will often be able to find the secondary schedules that pay well over 99 percent, and that’s not too shabby.)

You can find a complete listing of available Ultimate X pay schedules along with the optimal returns at wizardofodds.com, an excellent source for information, odds and strategies for all video poker games. It’s one of several great sources on the internet to learn about the various video poker games, and how to play them. Another great one is videopoker.com, where you can join and play games for free.

Keep an eye out for more specialty video poker games from IGT to appear online. Many of the newest offerings are very cool. Ultimate X Gold adds a persistent feature to the Ultimate X game. Instead of applying the multiplier to a single hand, it applies the multiplier to a hand on the pay schedule which sticks until it hits.

Another standout is Stack ‘Em High, a multi-hand game that awards up to nine additional hands when two Aces or Deuces, depending on game family being played, are received on the initial deal. Drawn Aces or Deuces then replicate into remaining hands, making it easier to fill in big wins.

This is the year to celebrate! Sign up to play at CaesarsCasino.com, and your first deposit will be matched dollar for dollar up to a whopping $2,021.

Ultimate X Poker is most easily found online as one of the choices in a multi-game menu that offers the games up in multi-hand versions. Triple Play Poker deals three identical hands at once, Five Play Poker five hands, etc.

These games deal the same five initial cards for three hands, five hands, or however many hands are displayed. The cards you hold are frozen in all the hands, but the computer selects the draw cards for each hand from a different deck containing all but your held cards.

The strategy for these games is the same as if you were playing a traditional single-hand game. But the player has multiple chances to land a winning hand from good initial cards. Wins for any pat hands are multiplied by the number of hands being played. If you’re dealt four cards to the royal flush, you have several shots at landing that last card, and maybe even getting more than one royal flush payment.

And to whittle that house edge down to zero.