Valley View Casino Among the First to Reopen in San Diego 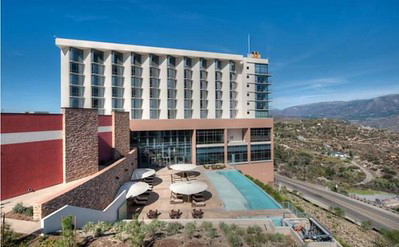 Valley View Casino will be among the first of San Diego County’s tribal casinos to reopen first thing in the morning of May 22, almost exactly two months after closing in the wake of the Covid-19 outbreak. Longtime General Manager Bruce Howard says he doesn’t ever remember being more excited.

In an interview with GGB News, Howard said tribes in San Diego County—which has the largest concentration of Indian casinos in California—I have cooperated in their decisions to close and now to reopen. He said the chain of command started with San Pasqual Tribal Chairman Steven Cope and including other tribal chairs, their gaming commission and county and state officials.

“This decision was made in anything but a bubble. There were probably eight or 10 entities that were involved,” said Howard. During the shutdown, the casino general managers and tribal chairs spoke two and sometimes three times a week on conference calls. They agreed on many of the safety protocols they would adopt when they reopened.

“It was a very collaborative thing that we try to do together,” said Howard. “It was big-picture, our reading of what’s best for the community.”

Boyd Long, Valley View’s vice president of security and risk management, spearheaded implementation of the safety measures that will be in place, and collaborated with his peers in other county casinos. “On a weekly basis, I was also speaking to other security and risk managers,” he said. “We were looking at best practices. We didn’t look just at casinos. We paid attention to what was going on everywhere.”

They observed how markets, hardware stores and even dry cleaners were managing visitors. They “took it all in,” he said, and clearly feels that Valley View will be implementing the “best of the best practices.”

“I think when we open, we’ll be a benchmark for others, in terms of safety and sanitation,” he said.

On entering, all guests and team members must wear a mask and will automatically have their temperatures scanned by an electronic imaging machine. If the temperature is elevated, individuals will be asked to step out of line for a forehead temperature check with a handheld device.

On the casino floor, guests will find about 40 percent of slot machines shut down and no more than three chairs per table game.

“At the table games, we’ll have a system with no card touch,” Long added. “Only the dealer touches the card.” Guests must wear clear gloves to handle chips, and dealers will monitor them to ensure they’re not touching their faces. Wearing gloves is not optional, and anyone who refuses will be asked to leave the table.

Some popular slot machines will be next to each other to allow couples to sit together. Long said, “About 40 percent have been shut down with a few of the games we know couples like to play. Half of table game chairs and half of the restaurant chairs have also been removed.”

The casino will also keep a running total of guests and when it hits a predetermined capacity, new guests may only enter as others leave.

Employees have been told to remind guests about social distancing and be on the lookout for groups of people congregating, which is not allowed. Those who insist on breaking this rule will be asked to leave.

The casino is trying to create a contactless environment, encouraging cash transfers using systems like Apple Pay. Cash transactions are an exception, but they only represent about 10 percent of the total, said Long. In the case of cash, employees will use gloves when possible and plenty of hand sanitizer. Employees wandering the casino will carry fanny packs of wet wipes that they will offer freely to guests.

At any point where employees come in contact with patrons—such as the players’ club or restaurants—Plexiglas dividers have been installed, said Long.

Although most of the casino restaurants will reopen May 22, its celebrated Maine lobster buffet won’t reopen right away.

“We’re working on a new concept for our buffet,” said Howard. “It’ll be nothing like a buffet anyone has seen. We’ll have more details coming.”

Also missing, at least at first, will be valet parking and the luxury bus service. For a time, patrons will self-park and everyone will enter through the same entrance.

Valley View’s modest 108-room hotel will also get frequent scrubbing and sanitizing, Long said. “We’re pretty spotless and sanitized and more cognizant of safety practices. The hotel is as safe as any area in the casino if not cleaner.”

Although bell service will be available on request, Long anticipates that most people will want to carry their own bags, at least for a time. “If someone needs bell service, we’ll provide it. We’ll continue to be a full service property, but do it under restrictions.”