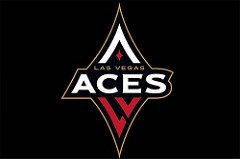 Las Vegas’ newest pro sports franchise has a new name to go with its new home.

The WNBA’s San Antonio Stars, purchased this fall by MGM Resorts International, will be the Las Vegas Aces when they begin play in 2018 at MGM’s 12,000-seat Mandalay Bay Events Center.

Detroit Pistons great Bill Laimbeer, who has coached in the league for 13 years, will be head coach and president of basketball operations.

Following the NHL’s Golden Knights, the relocation of the NFL’s Oakland Raiders in 2020, the United Soccer League’s Las Vegas Lights FC, and the Las Vegas 51s, a Triple A minor league baseball team, the Aces are the fifth pro team to call Las Vegas home.

The aces plan to spend $10 million to upgrade the Events Center, and WNBA President Lisa Borders said the team is looking forward to playing to full houses.

“That’s the benchmark for success. You’ve seen the Golden Knights come in a few months ago with 18,000 at their game. We’d like to see the same thing at Mandalay Bay. It’s a smaller arena, so obviously you can’t have the same numbers, but you’d like to see a full arena.”

Much of that will depend on the team’s performance, which hasn’t been stellar in San Antonio. The Stars have finished at the bottom of the Western Conference in each of the last three seasons with a combined record of 23-79. But Laimbeer, who has turned around the fortunes of the league’s Detroit Shock and New York Liberty and has three WNBA championships to his credit, said he expects the Aces will generate exciting and entertaining play for Vegas fans.

“This is a natural place for a lot of teams to be,” he said. “It’s the entertainment capital of the world, and we’re all playing a sport, but it’s still entertainment.”