Vegas Is Back—and So Is Covid-19 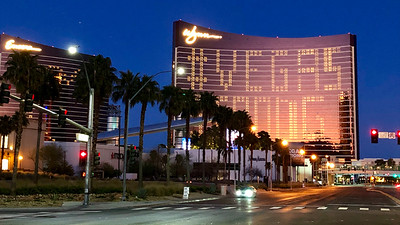 The city is pacing a statewide surge in new cases of the potentially deadly contagion at rates that far exceed the national average and is seriously pressuring hospital capacity. Even the White House is concerned.

Not quite two months have gone by since Nevada’s casinos reopened, and already the coronavirus is taking its toll.

Record-setting numbers of new infections and hospitalizations have been reported throughout July.

Last week, fatalities surpassed 700 for the first time as the state twice set a record for deaths in a single day at 28. New infections increased by more than 1,100, raising the total number of confirmed cases past 38,600, led by Clark County, which reported 1,032 new cases at midweek and 24 new fatalities.

Clark County, home of the casino capital of Las Vegas, has accounted for more than 33,000 of all the infections in the state and more than 570 of the deaths.

More worrisome is the state’s soaring rate of positive tests, a metric that public health officials and epidemiologists watch closely to gauge the level at which the contagion is spreading through a community. The World Health Organization recommends a rate of 5 percent or lower for at least 14 days prior to reopening. As of July 21, Nevada’s rate stood at 26.4 percent, with a seven-day moving average of 22 percent, far exceeding the national average and placing the state alongside Arizona, Texas and Florida as an epicenter of the pandemic.

“I would say in the last month we’ve been completely overwhelmed with Covid-19 patients, and our hospital is running out of space,” said one Las Vegas emergency room doctor who spoke to national news website The Daily Beast on condition of anonymity. “Not only are we overwhelmed and terrified, but based on the numbers for the rest of the country, it’s only going to get worse for us.”

In May, Governor Steve Sisolak began relaxing a lockdown of the state’s tourism-dependent economy that dated back to mid-March. On June 4, this was extended to the casino industry, the state’s principal economic engine and its largest employer.

Though official tourism counts for June and July have yet to be released, by all accounts the reopening has been a hit with visitors. On the down side, 16 of them tested positive for the virus in the first week the casinos resumed business, according to the Nevada Department of Health and Human Services. Yet, three more weeks came and went before Sisolak issued a statewide order making face coverings mandatory in public, including in casinos, where reports were rife that even the most basic safety precautions were largely being ignored. Since then, more than 120 Las Vegas casino visitors have tested positive for the virus, and at least one casino employee has died.

Properties have not been releasing the numbers of positive tests among their employees, but the Culinary Union, which represents some 60,000 industry workers in Nevada, said last week that more than 350 members have been hospitalized with the virus and 20 members and/or their spouses and children have perished from disease.

“It’s even more troubling that Covid-19 in Nevada is disproportionately impacting communities of color,” Bethany Khan, the communications director for the union in Las Vegas, told The Daily Beast. “Workers fear that they will contract the virus and bring it home to their families or possibly die from it.”

Brian Labus, a professor of public health and outbreak investigation at the University of Nevada, Las Vegas, explained it this way: “You have to remember the kind of people who are coming to Las Vegas right now. It’s the people who are the least concerned about this outbreak right now–least likely to follow the social distancing.”

He added, “I think the mask mandate will have a big dent on cases.”

Hopefully, that proves true. But a July 14 report from the White House obtained by the Center of Public Integrity concluded that Nevada had slipped into what it terms the “red zone” for new Covid cases, joining states like California, Arizona, Texas and Florida, which are among the most infected jurisdictions in the world.

The report recommended the state limit large gatherings and close down indoor establishments.

Earlier this month, Sisolak ordered bars in seven counties, including Clark, to close. It’s not likely, however, that a business as vital to the state’s economy as gaming will have its marching orders altered in any substantial way.

As Labus put it, “The big surge in cases in Nevada (is) among Las Vegas residents—but even if Las Vegas puts a bunch of measures in place, it wouldn’t matter unless it was implemented statewide. You can’t just focus on one jurisdiction, because people move around.”

In the meantime, hospitals are dealing with the impact. Citing statistics from the Nevada Hospital Association, The Daily Beast reported that as of late last week, around 77 percent of staffed beds across the state were occupied, and 785 confirmed virus patients were admitted. About 40 percent of the state’s ventilators were in use.

A spokesperson for University Medical Center in Las Vegas told the site that the hospital’s ICU occupancy had exceeded 90 percent but stressed that staff “have the ability to significantly expand this capacity.”

“Following a detailed planning process, we have teams in place to activate alternative surge space throughout UMC as needed.”

Not everyone is so sure.

“People here in Las Vegas don’t see this pandemic as an issue,” the ER doctor said. “Well, once the hospitals are filled and there is nowhere to go, they will realize they should have been more careful.”

Nevada added back nearly 90,000 jobs in June, alleviating an unemployment rate that had been the worst in the U.S.

Figures released earlier this month showed the jobless rate had improved to 15 percent, down from more than 25 percent in May, the biggest drop in the country, according to U.S. Bureau of Labor Statistics results cited by The Associated Press.

At its peak in April, the state’s unemployment rate had surpassed 30 percent.

Nearly 73,000 of the restored jobs were in the leisure and hospitality sector, which had been devastated when the state’s casinos were shut down by state order in mid-March.

Despite the improvement, the June jobless rate remained the fourth-highest among all states, and experts predict it will be a long time before Nevada sees the low single digits that were the norm before the pandemic.

Las Vegas had the state’s highest unemployment rate last month at 18 percent, and it will be ticking higher in the weeks ahead now that Boyd Gaming has announced plans to follow through on an earlier warning that upwards of 25 percent of its workforce nationwide will be let go.

On the Las Vegas Strip, Circus Circus and Tropicana more recently announced plans to permanently lay off more than 870 workers between them.

Most of the cuts, 620, will occur at the Tropicana, where Assistant General Manager Mike Thoma blamed them on “the unfortunate result of Covid-19 related business circumstances that were sudden, dramatic and beyond our control.”

Circus Circus said 252 employees will be let go in increments beginning September 1. Most of those affected will be guest room attendants, dealers and casino floor supervisors, management said.

“Circus Circus Las Vegas has had to assess and make business decisions in order to effectively operate during these uncertain times,” a spokeswoman said. “We hope that business volumes will recuperate sufficiently so that most of our employees can get back to work in the near future.”