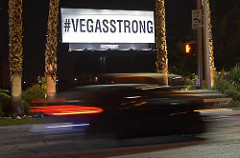 Three weeks after a lone gunman wrought bloody carnage on the Las Vegas Strip in the worst mass shooting in U.S. history, a city whose fortunes depend on a reputation for fun, freedom and heedless abandon is wondering when business as usual will return and what it will look like when it does.

The Wall Street analysts who follow the casino industry predict a short-term dip in visitation. But if similar tragedies are any indicator―the 2016 nightclub shooting in Orlando, Fla., to take an example―the impacts will be steadily less pronounced.

Experts with investment bank Morgan Stanley forecast demand to dampen for about six months and have a 4-6 percent economic effect, according to a new Associated Press report.

Las Vegas last year welcomed 42.9 million visitors and hosted almost 22,000 conventions. On average, 95 percent of the 149,339 rooms available were booked during weekends. Clark County, which includes the Strip area and most of the greater Southern Nevada market, recorded gambling revenue of $9.7 billion.

What’s certain is that resorts citywide are carefully re-examining their security measures to prevent anything like what happened on Sunday, October 1, when Stephen Paddock, a resident of Mesquite, Nev., 80 miles north of Las Vegas and a frequent visitor to the city, opened fire on an outdoor country music concert from a suite near the top of Mandalay Bay, killing 58 people and wounding 489 before killing himself as police closed in.

What has experts concerned is that Paddock, who checked in to the hotel that Friday, had managed to bring 20 rifles into his room and leave a car in the Mandalay parking garage laden with 1,600 rounds of ammunition and 90 pounds of chemical explosives.

But how much security is too much, particularly when it’s obvious and potentially intrusive, especially in a resort environment?

“You don’t want it to become a sort of ground zero military-type of operation,” said Michael McCall, who teaches hospitality at Michigan State University. “People are going there largely for fun.”

MGM Resorts International, the gaming giant that owns Mandalay Bay, told AP it has elevated security across its dozen Strip hotels but didn’t elaborate. The company also declined comment on any hotel or convention cancellations. Caesars Entertainment said its properties haven’t seen any cancellations above normal, and no conventions had been called off.

Elsewhere, there are noticeable changes.

The famed “What Happens in Vegas Stays in Vegas” slogan has been put on hold, and electronic billboards that typically promote restaurants, concerts, a topless pool and other entertainment are now showing a dedicated phone line for victims and their families, along with words of appreciation for first responders and casino employees.

MGM, for its part, quickly shelved a widely publicized corporate branding campaign launched just a couple of weeks ago―“Welcome to the Show,” it was titled―in favor of a message stressing unity and healing. The 30-second TV spot, set to the tune of “This Little Light of Mine” by Odetta, features the lines “Together We Are One, Together We Rise” and “Together We Shine” interspersed with visuals of Las Vegas and the company’s resorts. It ends with the hashtag #VegasStrong.

Meanwhile, MGM, which is already facing the first of what is expected to be a flood of victim lawsuits, has retained New York-based corporate communications firm Joele Frank, Wilkinson Brimmer Katcher to assist with media and investor relations as the investigation into the shooting moves forward.

Joele Frank has helped companies including Herbalife, Chipotle, Hertz and Yahoo! fight off aggressive activist investors such as Carl Icahn, Bill Ackman, Dan Loeb and Jeff Smith in recent years. The firm advised MGM during the takeover of Mandalay Resort Group in 2005. Caesars hired the firm in 2015 during its contentious debt restructuring.

“They are considered one of the two or three best at this particular kind of work,” said Paul Holmes, publisher of the public relations industry site The Holmes Report. “They do advocate their clients’ positions quite fiercely when necessary.”