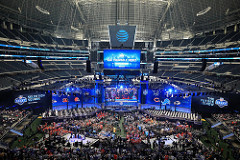 The National Football League will be holding its 2020 draft in Las Vegas, a move timed to coincide with the debut season of the Raiders as the casino capital’s home team.

Raiders owner Mark Davis professed himself “totally excited” with the decision, which was announced December 12 at the league’s annual winter meetings in Arlington, Texas.

“Bringing the Raiders to Las Vegas was more than just 10 football games a year,” Davis said. “When you bring the National Football League somewhere, they get a lot of ancillary benefits. The draft is one of them.”

NFL Commissioner Roger Goodell said, “We look forward to working with the Raiders, Las Vegas officials and the Las Vegas Convention and Visitors Authority to create an unforgettable week-long celebration of football for our fans, the incoming prospects and partners.”

The draft will be held before the expected opening of the team’s new $1.8 billion domed stadium, which is under construction just west of the southern end of the Strip. It’s reported, however, that the league plans to hold some type of event at or around stadium property during the three-day draft.

Las Vegas beat out Kansas City and Cleveland to win the event, which, like the Raiders’ 2017 decision to leave their long-time home in Oakland, Calif., is expected to generate sizable economic benefits citywide. The 2018 draft in Arlington generated a record $125.2 million in economic impact