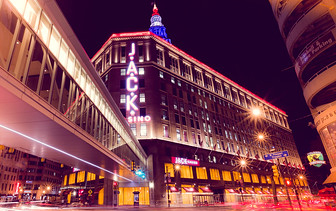 Analysts are applauding the $843.3 million deal announced by real estate investment trust VICI Properties in which it will buy and then lease back the JACK Cleveland Casino (l.) and nearby JACK Thistledown Racino.

New York City-based real estate investment trust VICI Properties Inc. recently announced an $843.3 million deal with Dan Gilbert’s JACK Entertainment LLC whereby VICI will purchase and then lease back the JACK Cleveland Casino and the JACK Thistledown Racino in North Randall, Ohio. Both properties will continue to operate under the JACK name. The transaction is expected to close in early 2020 pending regulatory approvals.

In a news release, VICI Properties said the master lease for the two Cleveland-area casinos “will have an initial total annual rent of $65.9 million, for an implied capitalization rate of 7.8 percent and an initial term of 15 years with four 5-year tenant renewal options.”

VICI Properties President and Chief Operating Officer John Payne said, “Ohio continues to be one of the healthiest and fastest-growing regional gaming markets, and we are thrilled to add high-quality urban real estate to our portfolio at an attractive capitalization rate. This transaction represents another great example of VICI’s ability to creatively source and execute accretive deals that bring value to our shareholders, while furthering our strategic goal to diversify our roster of best-in-class gaming operators.”

JACK Entertainment CEO Mark Dunkeson noted, “The combined efforts of our gaming properties together with the other Cleveland assets operated by our sister companies, including the Cleveland Cavaliers, Avenue Shops at Tower City and the May Company building, have created a strong connection to the city and allows us to remain heavily committed to the Cleveland area.”

Dunkeson said JACK Entertainment invested more than $700 million into JACK Cleveland and JACK Thistledown since the properties opened in 2012. “We will continue to invest significant capital into these properties which will have a lasting positive impact on the city and Cuyahoga County,” he said.

JACK Cleveland Casino opened in May 2012 in the historic Higbee Building. It offers 96,000 square feet of gaming space with 1,300 gaming machines and 120 table games plus eight food and beverage outlets. It’s connected to the 205-room Ritz-Carlton and 440-room Renaissance hotels.

The sale/leaseback agreement is JACK Entertainment’s third deal in the last year. In April, JACK Entertainment announced a $780 million agreement to sell its Cincinnati casino along with Turfway Park in Kentucky to Hard Rock International and VICI Properties; the $558 million Cincinnati deal closed in September. The Turfway Park deal still is awaiting regulatory approval. In May, JACK closed on the $1 billion sale of its Detroit Greektown Casino-Hotel to Penn National Gaming.

Union Gaming Group Gaming Analyst John DeCree said, “With this deal, VICI will have increased year-to-date acquisition volume to roughly $4.9 billion and will have expanded its tenant partnerships to five since 2017. VICI has begun to create some distance between itself and its peers. VICI appears to be emerging as the REIT partner of choice. VICI may have not been the highest bid for the Cleveland real estate, but the company’s long-standing relationship and willingness to provide flexible solutions helped get this one to the finish line.”

And Jefferies Gaming Analyst David Katz told investors, “We continue to favor the active diversification for VICI with additional tenants, given recent deals. We maintain our view that the growth from pending transactions supports a considerably higher level in the shares.”

VICI is one of three gaming-focused REITs. Gaming and Leisure Properties was spun off from Penn National Gaming in 2013 and now has 44 gaming and related properties. MGM Growth, which launched in 2015, has 15 properties, all managed by MGM Resorts which recently announced a $4.25 billion sale-leaseback of Bellagio to a REIT owned by the Blackstone Group.