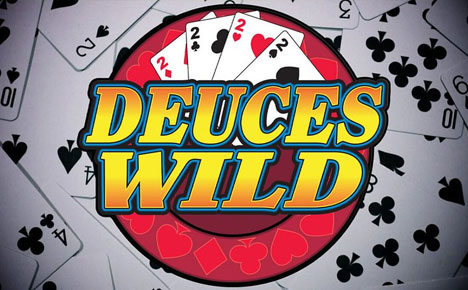 Deuces Wild is among the highest-returning video poker games in casinos, but it’s hard to find the top-paying version, which returns more than 100 percent with perfect strategy (a player’s edge game). Online, though, you can find a couple of very good alternatives to that top schedule.

Get up to $100 cash back when you sign up to play at Tropicana Casino—that’s real cash, not bonus dollars! Join now.

The best version I found online is what’s known in the video poker subculture as the “Not So Ugly Ducks” pay schedule for Deuces Wild—so-called because its return is lower than the top version of Deuces, but is still among the top returns anywhere at 99.73 percent.

That pay schedule is as follows (amounts shown are single-credit pays):

Make your first deposit at SugarHouse Online Casino and get a 100% deposit match up to $250. Because you deserve more!

One great version of Deuces Wild online is a rare video poker title from a supplier other than IGT, the source of most video poker games. It’s called Deuces Wild Elite, and you’ll find it at the Golden Nugget and Caesars online casinos.

Sign up to play at Mohegan Sun Casino and you’ll get a 100% deposit match up to $1,000! For big bonus bucks, get started today.

This version of Deuces Wild is distinguished by extra pays for five Aces and for four Deuces with an Ace kicker. There are also payoffs for five 3s through 5s and five 6s through Kings—much higher than the 16-for-1 payoff for five of a kind on the standard Deuces pay table.

The tradeoff is lower returns on several of the lower hands. It returns 99.45 percent, which is higher than full-pay Bonus Poker and just under the most prevalent video poker game, Jacks or Better.

The strategy for Deuces Wild is one of the easiest to master. With Deuces being wild, hands like one pair and two pairs become insignificant and thus have no value. The top hand is, of course, four Deuces. The wild status of the Deuce means strategy is different according to how many Deuces you receive on the deal.

If you’re dealt three Deuces, you’re going to discard two cards in most cases—not all. If the hand forms a wild royal flush or four to a wild royal, you keep that pat hand. Most experts also will tell you to keep five of a kind with three Deuces.

If you’re dealt two Deuces, discard three cards unless it forms four of a kind or higher, or four to the royal flush.

There are a wealth of websites where you can learn the complete strategy for Deuces Wild. One of the best is wizardofodds.com. There, you’ll find a simple strategy that lays out all the options in the form of a list of the hands that tells you when to discard and when to stand pat.

There’s also a wealth of software available on the web that lets you practice your strategy, giving you alerts when you’ve made the wrong choice.

Double your fun at Pala Casino! Sign up to play, and Pala rewards your first deposit by doubling it with a 100% Deposit Bonus up to $250.

Frank Legato is iGP’s resident poker king. For more on the best online games and how to play, click here.